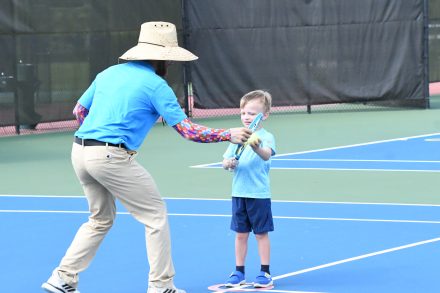 Kids ages 5-13 hit the tennis courts on Wednesday for their final day of the Play Bainbridge Tennis Camp.

Although the first two days of camp were held inside due to weather, tennis pro, Tim Thompson wanted to make sure campers got the full tennis experience on Wednesday.

“We did forehands, backhands and volleys at the net,” Thompson said. “They were able to rally and hit back and forth.”

Thompson said hitting back and forth was one of the kids’ favorite parts of the experience.

“It was really exciting to see them actually be able to hit it back and forth,” Thompson said. “Even at the ripe age of 5-years-old.”

Leighton Moye, 5, said she had never played tennis prior to camp, but she really liked tennis, especially the games.

Some of the games Thompson played with the campers included, King of the Court and Jailbreak.

Moye even told Thompson she wants to keep playing tennis after camp.

Thompson was ecstatic to see so many young kids loving the game.

“It was really cool to see them be able to understand the game and then actually go out there and play,” Thompson said.

Some of the older, more experienced campers enjoyed the ability to be able to play tennis against their friends.

Josh Adams, 11, said he had played tennis for a little over two years, but camp allowed him to hang out with his friends and play against them.

Although tennis camp drew to a close on Wednesday, Play Bainbridge will be offering additional soccer camps and baseball camps that will allow kids to learn more about the sport and hang out with their friends as well in the coming weeks.

Members and fans of the Bainbridge Little Theatre lost one of their most loyal star supporters this past week. Roger... read more