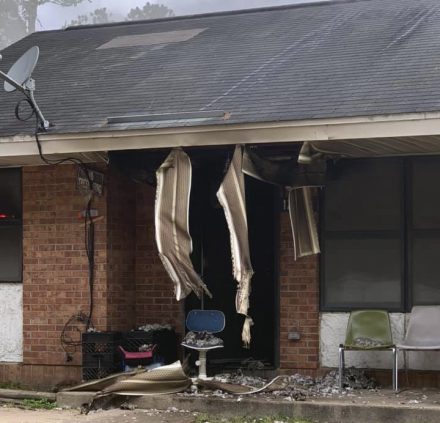 The remnants of the home following a grease fire on Tuesday 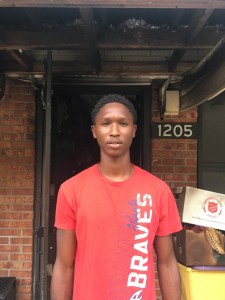 Chianti Bryant, 18, is being heralded as a hero after saving three occupants from a burning apartment.

On Tuesday, June 2, at approximately 11 a.m., Bainbridge Public Safety was dispatched to a fire on the 1200 block of Water Street, after a resident left a pot of grease on the stove.

According to witnesses, neighbors noticed smoke coming from the building across the street. Upon seeing the smoke, Tanisha Rivers asked her son, Bryant, to run over and check on the occupants.

Rivers thought the occupants may still be inside the building and unaware of the immediate danger they were in.

Bryant followed his mother’s instructions and approached the burning building, where he found the front door locked. Bryant banged and kicked the door as hard and loud as he could, according to reports.

With no luck, Bryant then caught a glimpse of Calvin Oneal James through the front window and got his attention. James unlocked the door and Bryant was able to help get him out of the smoke-filled apartment.

Bryant then re-entered the building in an attempt to locate additional occupants. He found James’ 16-year-old daughter trapped in a back bedroom, as well as an 18-year-old male still inside. Both had been asleep and were disoriented by the smoke when Bryant awakened them.

Bryant then assisted both tenens in getting out of the burning structure and to safety.

Moments after successfully rescuing all three occupants, Bryant collapsed on the lawn of the structure. However, BPS and EMS were arriving and immediately assisted Bryant and transported him to Memorial Hospital. He was then treated for smoke inhalation and later released.

BPS is thankful for Bryant’s bravery.

Upon investigation, BPS fire deputy Ryan Deen said the stove fire traveled all the way up to the attic and took some of the sheetrock.

“I’m so happy everyone made it out alive and that Mr. Bryant woke everyone up,” Deen said.

The fire caused significant damage, especially in the kitchen and living room. The home is currently unlivable, according to Deen.

Memorial Hospital and Manor recently acquired the SARS-cov2 IgG antibody test that will let patients know if they have already... read more