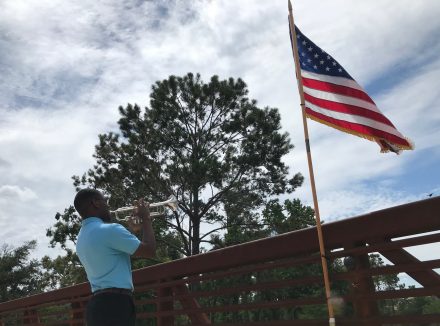 Kelvin Wells was one of the BHS band members who took part in Taps across America on Memorial Day.

Several students from Bainbridge High School played TAPS over the weekend in response to Taps Across America, which called for a rendition of the song to be played on CBS Evening News.

Steve Hartman originally posted for people to play the song, while being recorded by a friend or family member so he could later share it across multiple platforms for his on the road edition.

Band Director James Sewell saw this posting and approached some of his band students.

“I became interested in it when I saw his story on Facebook,” Sewell said. “I’ve always liked his series because he goes out into communities all over the country and finds stories that represent the goodness in the heart of America.”

Sewell got a resounding response from some members of the trumpet section, along with former band members.

Austin Aldridge, Madison Jones, Zach Miller and Gracie Surratt were just a few of the many who participated. Surratt even had the opportunity to play TAPS for her father, who is a veteran and was able to salute the flag while she played.

Kyle Horne, a 2013 graduate and former member of the U.S. Marine Corp. also played along with 2010 graduate Erick Juarez.

Sewell was pleased with how many members were willing to play in memory of fallen officers.

“We hope this is just a beginning and it will grow from what was started for this Memorial Day,” he said.

This also provided Sewell with ideas on other ways the band can serve Bainbridge and Decatur County. He said the community can hopefully look for more things of this nature in the future.

He is thankful for Hartman’s opportunity he gave the students to play and was honored by the response of the community.