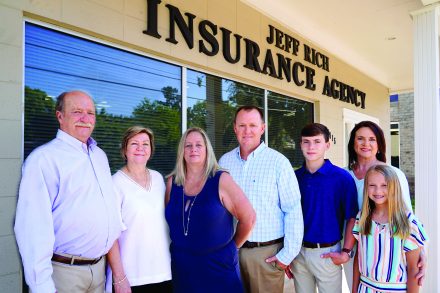 Country Financial Insurance is staying in the family, changing hands from Lane Rich to his son, Jeff.

After more than 35 years of serving the southwest Georgia community, Lane Rich of Country Financial Insurance is passing the business on to his son, Jeff.

Lane began his insurance career in 1984 with Cotton States Insurance at his office downtown on Broughton Street.

Country Financial took over Cotton States in 2005, and Lane was able to merge his business to the new company.

He and his wife, Billie Jean, have faithfully served Decatur County and the surrounding area where they have fostered trust and long-lasting relationships with their clients.

Jeff was raised in Climax, Ga., at their property known to locals as “Camp Flats.” He graduated from Bainbridge High School in 1995 and went on to earn a bachelor’s degree in business finance from Georgia Southern University in 2000. After graduation, he began working for Yancey Brothers Caterpillar in downtown Atlanta. Transferring home to South Georgia in 2003, Jeff enjoyed a successful twenty-year career in equipment sales. “Yancey is a great company to work for. I loved my job. I was able to bring a quality product to the hardworking men and women I served,” said Jeff.

The decision to change careers and become an insurance agent is one that Jeff didn’t take lightly. He knew that his father had built a stable, successful business and being able to join his parents and see their hard work continue to flourish was very important to him. “I spent many afternoons after school at the office with my parents as a boy,” Jeff said. “I know how hard they work to make sure their clients are taken care of. A strong dedication to the community is something they instilled in me from childhood. It’s not just a job to them.”

“After Hurricane Michael, it became clear to me that Country Financial and my parents stands one-hundred percent behind their clients.

They worked day and night, weekends and holidays to make sure that every single claim was seen to fairly and quickly. That is the kind of company I want to be a part of and I look forward to being able to carry on that legacy.”

Even though Jeff is the new Country Agent, Lane and Billie Jean haven’t retired to their rockers on the front porch just yet. They, along with their long-term employee, Donna Sanders, are still working every day at Rich Insurance Agency. “There’s nothing more a father can hope for than to pass along his successful business to his son. Jeff has always been a very hardworking, driven person and, even though he’s my son, I couldn’t think of anyone better suited to this job,” said Lane.

Lane plans to continue to mentor Jeff as he picks up the reigns to Rich Insurance Agency. “I couldn’t do this without both my parents and Donna. They know so much about the insurance business, and I’m very lucky to have them support me and our clients during this transition,” said Jeff.

Students get meals over break

The Decatur County School System finished their meals to go program this week. They will now take a one-week hiatus... read more