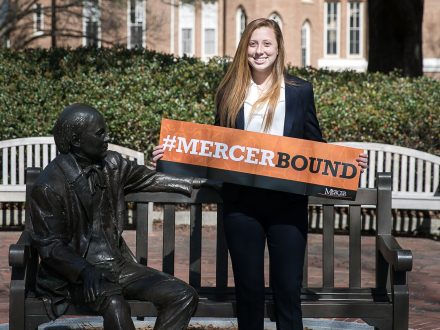 Gracie Surratt and Garrett Donalson are two of ten students across the United States, who got accepted into Mercer University’s Special Consideration program for the medical school.

Bainbridge High School senior, Gracie Surratt and Grace Christian Academy senior, Garrett Donalson have a lot to be proud of. The two students were recently selected to be a part of Mercer University’s Special Consideration Program for Medical School.

Surratt and Donalson both have ambitions of going into the medical field. This Special Consideration Program allows for students to complete their undergraduate studies at Mercer and later be accepted into the Medical College, as long as the student places within the 66th percentile of the MCAT. Unlike other students applying to the medical college, Surratt and Donalson will not have to interview.

“This program literally means everything to me,” Surratt said. “I’m one step closer to my ultimate goal.”

Surratt had originally been accepted to University of Georgia, but eventually chose Mercer after learning about the program. She said she liked the small feel and knowing she wouldn’t just be a number, but would be an individual in her field.

Surratt plans to eventually become a plastic surgeon, spending four years of undergrad at Mercer and four years there for medical school.

Donalson is also extremely thankful for the program.

He said he eventually wants to become a family medicine practitioner and this program provides him with a lot of opportunities he might not be privy to otherwise.

“It gives us easier access to the school and the program we want to go into,” Donalson said. “That way we can get out quickly and we can start practicing medicine and helping others.”

Donalson has considered returning to Bainbridge after medical school to be a family medicine practitioner, but he said no matter what he would like to practice in a rural area similar to where he was raised.