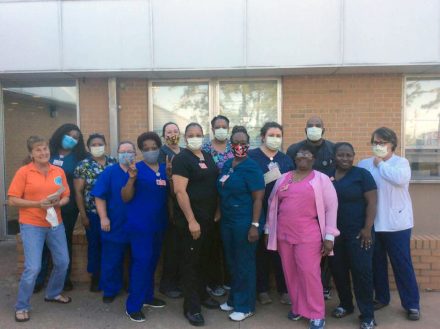 Russell Boyd, owner of the BBQ restaurant on E. Calhoun St. and a member of Memories Car Club, heard that 20 tickets were being bought for his restaurant. Boyd decided to match it, adding another 20 certificates that would be given to local healthcare workers.

Not long after that, Charles Heidt, owner of Skeeter Creek Automotive on Faceville Highway, asked about joining Memories Car Club. When he heard about the donation, he threw down a $100 bill and purchased another 20 certificates.

“My sister-in-law is a nurse,” said Heidt. “I’ve had a lot of nurses take care of me. Not a hesitation.”

Club co-founder Denise Webb was shocked from the amount of support her idea received. By the end of the day, the club had collected enough money to purchase 60 $5 gift certificates that she gave out to workers at Memorial Hospital and Manor, Bainbridge Health and Rehab and to local EMTs.

For Memories Car Club, it’s another gesture of the love and support that the club was founded on.

“Giving just a little bit to others means a lot,” said Webb. “That’s what we should be doing, encouraging others to give. The meaning of our car club is kindness, giving and showing love to the ones that need it.”

Every dollar that Memories Car Club raises goes toward helping the community, including children and elders. The satisfaction from helping and the smiles on the healthcare workers faces reminded Webb and the rest of the club why they do what they do.

“Our car club has been around for 3 years, and I have never seen such appreciation,” said Webb. “That tells you a lot that we need to step up and do more.”

On the morning of Friday, May 1, around 5:30 a.m., Bainbridge Public Safety officers were dispatched to an address on... read more