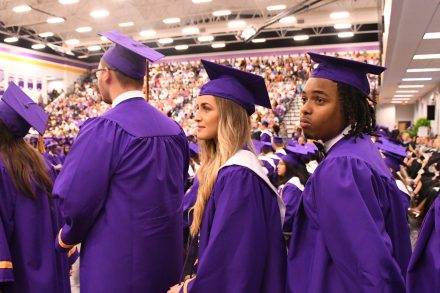 Students from last year’s graduating class line up to receive their diplomas at the Bainbridge Gym, where graduation is normally held.

Graduation plans still being made

While a traditional graduation ceremony may not take place on May 22 as planned, Superintendent Tim Cochran has a virtual ceremony in mind that graduates can keep forever.

Due to large gathering restrictions, Cochran said he believes it is not realistic to think the Class of 2020 commencement ceremonies could continue as originally planned. However, he has not cancelled the date as of yet and has alternative dates in mind, along with other solutions.

Cochran announced there will be a virtual ceremony on May 22, because he does not anticipate the Governor reopening the schools by then. The virtual ceremony will be a video commemoration created by Herff Jones. Graduates will submit a picture of themselves, along with a senior quote or memory that will be captured on the disc. The disc will also include a speech from the Valedictorian and Salutatorian, along with faculty members, congratulating them on their new adventure and next chapter in life.

Along with the virtual ceremony, Cochran still wants to hold an in-person ceremony when allowed. He has suggested the date of June 19 or July 24 for graduation. He has acknowledged the ceremony may look different from years in the past, but it will still allow parents to see their child walk across the stage and receive a diploma. Some of the key differences would be parents who work in the school system and would dress for the occasion would not have robes to wear at the because time did not allow for them to order. The other difference would depend on if everyone were able to gather for practice.

If everyone cannot practice together, Cochran has suggested formatting the graduation like a college ceremony and having students line up before handing an index card to the speaker, who would then recite their name as they walk across.

These would be two minor changes that would still allow for a traditional ceremony. Cochran intends to keep everyone updated as these dates near to see if a graduation is permissible at that time. Once permission is granted, information regarding the time and other fine details will become available.

The Salvation Army has always been known for their generosity and desire to help others in need; this uncertain time... read more