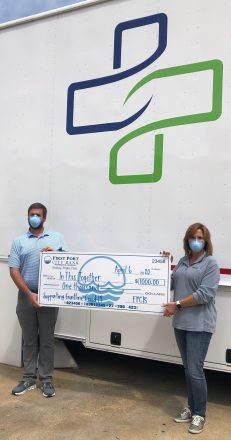 Rob McRae and Glennie Bench hold up a $1,000 donation from the All In Together campaign.

When Rob McRae called Glennie Bench with an idea to support local businesses and express gratitude to those on the frontlines of service, she wanted to help him get the project going.

McRae’s idea was to buy meals from local restaurants and caterers with donations from local businesses and individuals and deliver those meals to our local heroes.

“We can’t begin to comprehend the stress this virus has brought to the healthcare community and first responders. Although a free lunch doesn’t begin to solve the problem of this pandemic, we hope a little show of appreciation can help boost morale”, says Rob McRae. “We also hope that spreading some business around the restaurant industry can help ease some of the financial strain that has come with the shelter-in-place order.”

“We are surrounded by people who go to work everyday to serve the rest of our community. And the rest of us owe it to them to say ‘Thank you’”, says Glennie Bench, Chairperson of the Hospital Authority of Bainbridge and Decatur County and City Council member.

Within 24 hours, Scott Ewing, President of First Port City Bank, made the first donation and the “All In Together” campaign began.

“Without the financial support from local businesses this would have been nothing more than an idea. It’s just amazing to see how quickly everyone jumped on board when they heard what we were trying to do”, says McRae. In addition to the already mentioned, donations have been received from First National Bank of Decatur County, Rusty and Charlotte Davis, Wheat and Natalie Kirbo, Farm Credit of Southwest Georgia, Five Star Credit Union, Bank OZK, 3 Rivers Realty, and other donors that wished to remain anonymous.

Thanks to the generosity of all these businesses and individuals, All In Together has already provided 474 meals to the entire staff of Memorial Hospital and Manor. First responders and support staff with the City of Bainbridge and Decatur County are next.  And meals have been purchased from Crave Eatery, Southern Philosophy, The Bean, Boyd’s BBQ, Bonnie Blue House, Eats Southern Cookin’, Catering by JLo, Simply Southern Catering, The Pond House, Uncle Bill’s Pizza, The Grill at Bainbridge Country Club, and the pair is still reaching out to other restaurants to include as many as possible.

Bench added, “To all the local heroes who risk their own health to care for us when we’re sick; to those who protect and serve; to the crews who keep our water, sewer and natural gas systems working; to those who dispatch first responders wherever the need; and to the teams who support all those critical services – thank you.”

If you are interested in donating to support this project, make checks payable to Inland Family Foundation and write “All In Together” on the memo, and mail to PO Box 1510, Bainbridge, GA 39818.