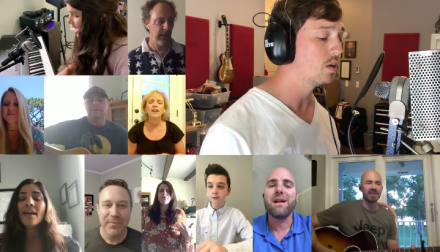 Like many other churches, Grace Church of Bainbridge had planned to have a large choir presence on board for Easter Sunday services; but, the Coronavirus quarantine changed all that.

Luckily, Mitch Hines, in charge of  the worship and children ministry at Grace had a unique backup plan.

He used an anthem he had composed back in 2019, one with which the congregation was familiar, and invited all to take part in what he aimed to be a virtual choir presentation.

He sought the collaboration of Dallas Burke to produce the main sound track, including playing the bass guitar, with John Huggins as the lead vocalist.

Once the track was created, a copy was sent out to several members asking their cooperation to record a video of them singing along, but on a separate recording called a flip grid, as they followed the track.

Shanell Schuyler was one of the 22 musicians who responded to contribute her vocal skills. She said it was kind of weird as she listened to the main track on a head phone, while singing and recording on a separate instrument. She found it to be  a bit disconcerting. “If I watched while I recorded it seemed like a second or two of lag time.”

Hines said when he received all the flip grid returns he began editing and placing the separate videos in place on the original sound track. He said it was his first time to do this method, and found it to be quite complicated and time consuming. “It took me all week,” he confesses. He had heard of other churches doing it and figured he would give it a try. “It was a great team effort. I texted everyone asking them to participate.”

He is excited about the results. “Just seeing us all together, that was the main intent. It was definitely worth it.”

He added that they have received so many comments and he knows it has been shared many times on Facebook. Schuyler agreed saying, “It is a special song to our church – the fact that it was written by our minister.” Titled “Because of Your Blood,” it carries the message of salvation. Her favorite line of the song is, And the over abundance you expended on us Forever changed our state. “It is just amazing to me,” she added.

Hines is originally from Iowa, and came to Grace and Bainbridge in September of 2011 to share his musicianship.

He enjoys writing songs and has written many, most with a Christian message. He actually wrote the songs for his own marriage ceremony and even some for his mother’s recent marriage.

Those wishing to hear the song, see the singers and read the lyrics may find it on the Facebook page of Grace Church in Bainbridge, Ga.

FNB to live stream Women in the Workforce luncheon

A springtime tradition in Decatur County is the annual Women in the Workforce luncheon hosted by First National Bank, but... read more