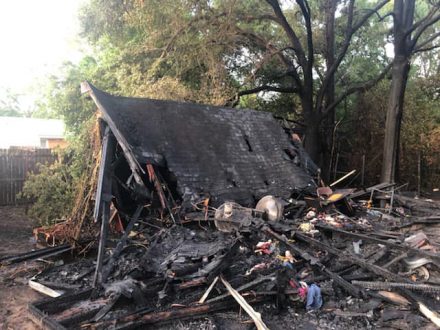 The shed at 1515 E. Water St. was burned down by a juvenile who is suspected of multiple recent arsons around his neighborhood.

Bainbridge Public Safety responded to a shed fire on Thursday night that led to the arrest of a juvenile who is believed to have been setting multiple fires in the area recently.

At approximately 7 p.m. BPS was dispatched to 1515 E. Water St., where smoke and flames were coming from an outdoor shed.

Fire Chief Doyle Welch said when they arrived the fire was already completely involved and caused the shed to be a total loss.

Upon investigation, the fire was declared arson and the estimated loss value was $12,000, along with losing some valuables.

Investigator Chris Jordan located the young man responsible for the arson and said this had unfortunately not been the first fire he set.

The juvenile, who lives with his grandmother, is believed to have been in connection with three other fires set.

“He’s not setting the fires to hurt anybody,” Jordan explained. “He just wants the attention.”

Jordan said earlier in the day the grandmother had issues with the young man behaving, which is when they believe he ran out to begin the fire.

He has been arrested and charged with arson, while Jordan and Welch continue to pick up the pieces of the outdoor shed.

A birthday party on wheels