A birthday party on wheels 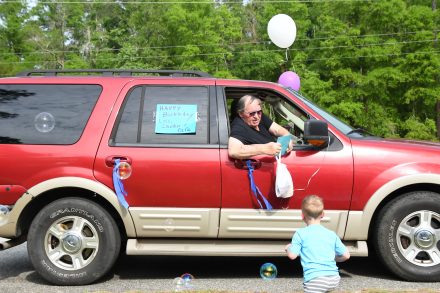 Chandler’s grandmother and papa drive by extending a card and candy out the window at his drive by party.

Like most boys his age, Chandler McConnell was excitedly preparing for his fourth birthday when the COVID-19 pandemic struck. His parents had purchased a new slide for the kids to play on out back and the theme was sharks; everything was in place when his mother, Janet had to cancel due to the governor’s orders.

Chandler was disappointed and didn’t’ understand why his friends and grandparents couldn’t celebrate with him, and the explanation didn’t make much sense to a new four-year-old.

Looking for an alternative way to celebrate his big day, Janet came across a news story of a family in California celebrating a “drive by birthday party” for their young one.

Friends and family members would decorate the car and say “happy birthday” as they drove by with the kid sitting outside.

Janet knew this was something that could be done for Chandler with the right preparation. She quickly took to Facebook and asked if some people from her church and Chandler’s Sunday School class would be interested in participating and was overwhelmed with responses.

She then contacted Bainbridge Public Safety to get permission for this unusual birthday parade, which they were happy to help with.

On Saturday afternoon at 5 p.m., Chandler sat outside his lawn, where cars lined around the block decorated with shark posters saying Happy Birthday drove by. Some drivers even threw candy out to Chandler, and he couldn’t have been more excited.

“I thought it was cool, it was so fun,” Chandler said.

Chandler even received some gifts such as a bouncy ball, a semi truck, shark pants and shirts and lots of candy.

Janet was appreciative to everyone, especially BPS.

“We are so thankful for our friends, family and community who love us and support us and made his day special,” she finished.

We at The Post-Searchlight wish you a Happy Birthday Chandler and hope this year is shark-tastic.