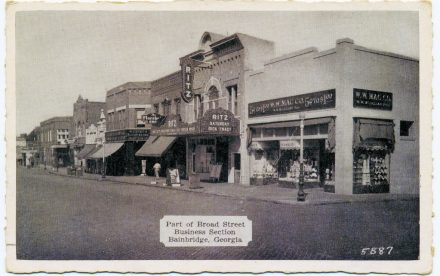 A postcard shows the Ritz on Broad Street in Downtown Bainbridge.

Persons traveling through downtown Bainbridge can’t help but notice the work being done on the facade of the LTL Flowers building on the east side of the square.

Denise Webb has owned the building and the business for 22 years and at the time of purchase she and family members did the research on its history. She has photos dating back to the 1800’s when it housed The Flint River mercantile store.

But by far, the more interesting history is when it was the Ritz movie theater. Denise said her Momma used to go to the theater when she was a teenager, as did most of the young folks in the area.

Clayton Penhallegon remembers as a boy riding his bicycle to the theatre on Saturday afternoons in the late 1940’s, early 50’s. “It was where everyone of my age went.” They always showed cowboy movies on Saturdays featuring such stars as Gene Autry and Roy Rogers. Theatre manager was Clark Gurley and it was not unusual for a mother of one of the boys to call Gurley and ask him to tell her son it was time to come home.

Penhallegon said, “It was the place to be and to be seen.” Then, along came the upgraded Martin Theater, located where the Bank of the Ozark drive thru is now located, and that marked the end of The Ritz.

Penhallegon said he was in the building later on when it was rented to another business and could see initials written on the walls. He also noted the floor sloped toward the stage as it did for the theatre.

Webb says she has always had a desire to try to restore the building to its original look. The brick front and upstairs windows were long ago covered up with stucco, and she longed to bring it back to its former glory.

After the hurricane damaged the building, she was motivated, with help from the insurance company, to get started on her project. She hired Chip Hall as contractor and he began work on the building mid-February.

A telephone interview with Hall found he is excited about trying to bring the building back to the original look. He knows there were originally three windows in the upstairs and he is hoping as he removes all the covering that he will still find them there. “So far we have been fortunate that the structure of the building has not been compromised.” He is happy they will be able to leave the bricks and the pilasters on each side of the windows. Hall, a Bainbridge native, has a long record of working on historic buildings., including the Bainbridge City Hall.

He just completed rebuilding the old cannon in Willis Park. As for the Ritz Theatre building, Hall says, “I am trying to bring back its old glory and revive history.”

Webb says additional plans for the building are under consideration, including adding apartments to the upstairs. In the meantime, she wants everyone to know that even while work progresses, she is open for business, as long as they pardon her mess.