Mark your maps for a Decatur County bear hunt 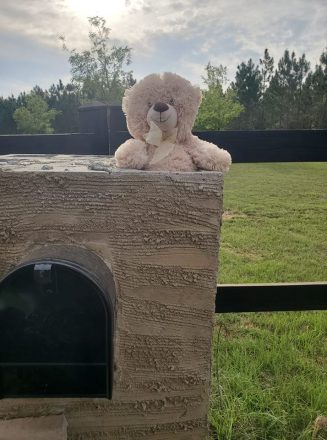 Christie Floyd posted a picture of her bear on the hunting group Facebook page. For those on the lookout this bear can be found on Bubber Road.

Residents may have recently noticed an abundance of stuffed animals in business and home windows. This is not a figment of the imagination; Decatur County now has a group of people dedicated to putting out stuffed animals, so children have an activity to participate in while still social distancing.

Fallon Richard, 7, is one of the many children who has enjoyed going on a “bear hunt.”

She and her mother have gone on several hunts since the bears started appearing.

“The other day I counted 48 bears,” Richard said.

Richard said some houses put out other “silly” characters that car riders can include in their count. She said she has seen a Pokémon, a Mickey Mouse and an alien balloon during her hunt.

Richard’s mother, Meghan Lashley said she thinks it’s a great activity and also possibly a learning tool. It’s teaching the kids to count, and some of the posts about where the bears are located encourage children to tell their parents what color they are and things of that nature.

Lashley said there are quite a few bears located in the Douglas Hills and Loblolly area, so she encourages anyone hunting to go there.

While Richard already knows how to count and her colors, she said her favorite part is just being able to do something fun with her mom.

For anyone interested in participating in the “bear hunt” with their child, a Facebook group titled the Decatur County Bear Hunt lists the address of homes where bears can be found, and pictures of where they are located. This helps alleviate driving around without a set destination and helps parents “hunt” with their kids.

Everyone is encouraged to set out bears and join in on the fun.