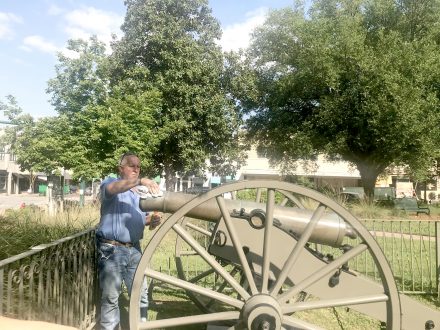 Chip Hall takes a rag to shine the cannon on Friday after he finished painting the base with his daughter, Anna Marie.

Roy Oliver approached Hall about fixing the cannon base due to some rotting, however when Hall began work on the cannon base it collapsed. Hall then began the process of disassembling the structure and taking out all the rotten wood and replacing the wheels.

“It was kind of like digging out a watermelon,” Hall said. “We dug out all the rotten wood and then epoxied it.”

Hall made sure he stuck to the historic elements. The cannon and base still have all of the original metal; they just took out the wood.

The cannon that sits on the base is not the original, because it would not fit the base, but it is still an 1850’s piece of history.

Hall delivered the restored cannon on Friday morning, before he and Anna Marie took to painting it and touching up the shine on the cannon that afternoon.

The cannon is now available for public view again and should be able to withstand any weathering for years to come.

Students are especially encouraged to visit the cannon, as the City of Bainbridge is now holding an essay contest on the cannon’s history.

All Decatur County public, private and home school students in grades 2nd-8th are eligible to participate in the essay contest. They are asking each student to write a 250-300 word essay, answering the questions of what year was the cannon originally cast?

What army was the cannon used by?

Where was the cannon originally manufactured? And when did Bainbridge receive the cannon?

Students will get extra points for any additional information. They are asked to also snap a picture with the cannon before turning in their essay, along with their school and current grade level.

Essays can be emailed to Crystal Hines at crystal@bainbridgecity.com or can be dropped in the drop boxes located in front of City Hall on Broad Street or behind City Hall on Clark Street.

If the student chooses to place them in the drop box, make them to the attention of Crystal Hines. All essays are due on April 10 at 5 p.m. and winners will be announced Monday, April 13.

Prizes will be awarded in lower elementary, upper elementary and middle school categories.

Prizes include a bicycle, $100 Bainbridge bucks and other surprises, so fire away on these historical essays.