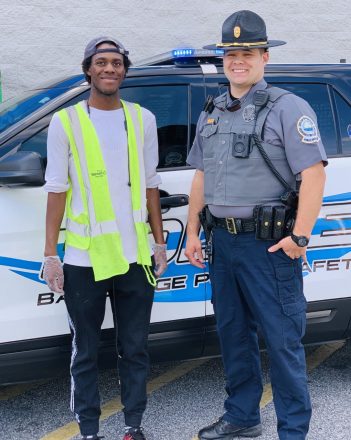 On the afternoon of Tuesday, March 3, a female shopper completed her purchases at the Bainbridge Walmart and pushed her cart full of groceries to her vehicle. She loaded the items and drove off. A little while later, she discovered that her wallet was missing. She panicked when she realized that the last place she remembered having it was when she was at Walmart, and she knew she would probably never see it again. She came to Public Safety to report it missing, and told officers that it not only contained important cards such as her driver’s license, but also approximately $600 in cash.

Captain Toby Miller received the information about the lost wallet and made a trip to Walmart to see if he could learn anything by viewing footage from parking lot video cameras. He stopped by the Walmart office and told employees he was there to follow up on a report of a missing wallet. The employees checked the office where lost-and-found valuables are placed and discovered that there was actually a wallet there. Captain Miller checked the wallet for any form of identification and to his surprise, realized that it was the lost wallet about which he had received the report!

Captain Miller contacted the female customer who had reported the wallet missing and told her the good news! She was ecstatic and couldn’t believe that not only had the wallet been turned in, but everything was still inside…including all of the cash! She asked Captain Miller to try to learn the identity of the person who was behind this good deed so she could express her appreciation. Captain Miller told her he would view the parking lot videos but the chances of learning who was responsible would be extremely slim.

Captain Miller watched the video footage that focused on the time and area of the parking lot where the female customer had parked her car and left her shopping cart. It wasn’t long before the video showed a Walmart employee approach the cart corral, pause, pick up something from within the cart, and then turn and walk towards the store. Captain Miller could hardly believe his luck when he realized that he had actually found out that the person behind this good deed was a Walmart employee!

On the afternoon of Tuesday, March 3rd, twenty-one year old Daniel Henry was completing his daily job responsibilities which include retrieving carts from the parking lot and taking them back inside the store. Daniel, an employee of Walmart for the past two years, glanced down into one of the carts and noticed a wallet. Without a moment’s hesitation, he picked up the wallet, took it inside the store, and placed it safely in the office. He then returned to the parking lot and resumed his duties of collecting the shopping carts.

On Thursday, March 12, Captain Miller learned from Walmart management that Daniel was working day-shift so he stopped by so he could meet him and express his gratitude. Daniel told Captain Miller, “I found the wallet and I immediately took it to the office…I knew that someone needed it and would want to get it back.” He humbly stated, “I didn’t do it to get any recognition or anything in return, in fact, I didn’t even tell anyone I had found it. It was just the right thing to do.”

Captain Miller told Daniel that police officers rarely recover missing wallets or handbags, especially those that contain cash or valuables, and he was thrilled to be able to share the good news with its owner. With a pat on the back, a smile, and a handshake, Captain Miller again thanked Daniel for his demonstration of outstanding citizenship and honesty, and said, “The world would be a better place if there were more people like Daniel in it!”