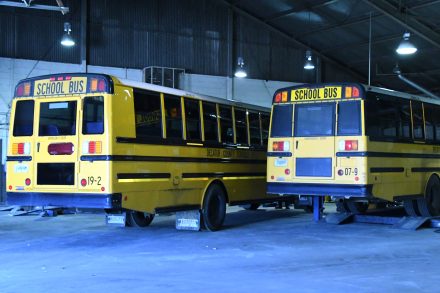 Buses wait in the maintenance shop while school officials listen out for updates to come.

The Decatur County Board of Education met on Thursday night for their regularly scheduled work session, where Superintendent Tim Cochran addressed other board members on what the Governor’s Task Force was recommending in the coming weeks.

Cochran said the Governor’s Task Force was looking for input from other Superintendents on how things were going in their district. Cochran said almost all Superintendents asked that Governor Kemp make an announcement by the end of the month regarding if schools would return to class or finish the semester online, so teachers could begin planning.

Cochran said the second thing discussed with the Governor’s Task Force was addressed by the Department of Education. Educators are questioning what does graduation of one grade look like when doing distance learning.

“A couple of educators believe they can whole-heartedly reach their kids through distance learning,” Cochran said. “But, what they had to understand is that’s not realistic for our lowest kids.”

Superintendents made the Governor’s Task Force aware that they need to keep in mind not what the most affluent kid has, but what the least affluent kid has. There will be children who had no Internet access, much less access to a Google Chrome Book.

“The DOE was very receptive to that,” Cochran said. “And, they want to make a unified decision across the state.”

Cochran said the Governor’s Task Force was not sure when they would be able to make a final announcement, but took everything said into consideration. They also discussed the realities of expectations placed upon the kids if school does not go back into session.

They understand kids cannot be held accountable for anything they did not learn prior to the school closing.

“We have to start talking about what it’s going to look like if they don’t come back,” Cochran said. “It’s hard to plan because we’ve never been here before.”

Digital resources are available for students and parents and Cochran said if they do not return to school he plans to make paper packets as well, but still doesn’t believe students can be held accountable.

Cochran is looking for guidance from the Governor and the DOE, when it comes to placement.

He said they will be pulling numbers to really look at the students. He’s not worried as much about middle school and high school, but kindergarten and first grade is where the foundation is really formed.

“I envision a kid in K2, not K,” Cochran said. “It would have some fluidity, so once the student becomes proficient in K, he would move on up.”

Cochran realizes he cannot hold all students back, but he has to make sure the foundation is laid.

“That K1 really scares me and I want to make sure we don’t miss them and set them back,” Cochran said.

Board Member Mike Conder asked about students who build on subjects such as geometry to move on to the next math.

Cochran also questioned that, wondering if you give them full credit for geometry and just reteach some of the material in the following math.

“We are not managing a sprint; we are managing a marathon,” Cochran said. “This is long term.”

Cochran explained that the State Department plans to meet next week and go into depth about that and also discuss the possibility of changing requirements for grades 9-12 for years to come.

Some of the board members suggested trying a bigger summer school for students who need remediation, which Cochran is considering doing with a budget amendment.

Despite all the uncertainties about the future of school, Cochran told the BOE he still plans to have graduation, even if it’s later in the summer.

“That is something that I don’t want to take away,” Cochran said.

All board members were in agreement, with Board Chairman, Keith Lyle even suggesting several smaller graduations if that were needed.

Cochran and the BOE will decide about graduation and other events in the coming months, following the Governor’s announcement.

Cochran hopes to have more information and guidance in the next few weeks so the school can begin planning and students can have peace of mind.

The City of Bainbridge is currently taking all precautionary measures to help reduce the spread of germs in the face... read more