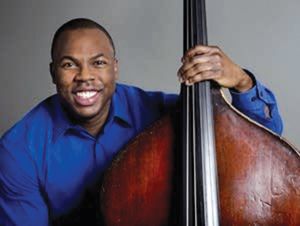 Bainbridge native Joseph H. Conyers, assistant principal bassist of the Philadelphia Orchestra, has been appointed to the Juilliard string faculty beginning this spring semester. He will be joining Juilliard’s other distinguished bass teachers: Timothy Cobb, Harold Robinson, and Eugene Levinson.

“We are absolutely thrilled that Joseph Conyers will be joining the faculty to teach and mentor the next generation of bassists here at Juilliard,” Provost and Dean Ara Guzelimian said. Mr. Conyers is the associate principal bassist of the Philadelphia Orchestra and an advocate for music education. He is now accepting a roster of full-time students in the College Division.

Juilliard’s string department is the largest department within the music division, representing about one-third of the total student enrollment. The faculty includes internationally acclaimed soloists, chamber and orchestral musicians, and leading pedagogues as well as the world-renowned Juilliard String Quartet.

An avid chamber musician and artist of the Chamber Music Society of Lincoln Center, he has performed internationally. Recognized for his artistic and social entrepreneurial endeavors, awards include the Sphinx Organization’s Medal of Excellence (2019)—the organization’s most prestigious recognition; the C. Hartman Kuhn award (2018)—the highest honor bestowed upon a musician of the Philadelphia Orchestra; and Musical America’s 30 Top Professionals – Innovators, Independent Thinkers, and Entrepreneurs (2018). In 2015, Conyers was the inaugural recipient of the Young Alumni Award from his alma mater, the Curtis Institute of Music. A formidable advocate for music education, he is the executive director of Project 440, an organization that helps young people use their interest in music to forge new pathways for themselves and ignite change in their communities. Additionally, he is the music director of Philadelphia’s All City Orchestra, which showcases the top high school musicians of the School District of Philadelphia. Conyers is a frequent guest clinician and lecturer presenting across the country.

Joseph is the son of Mr. and Mrs. Bernard (Emma) Conyers of Savannah, GA.