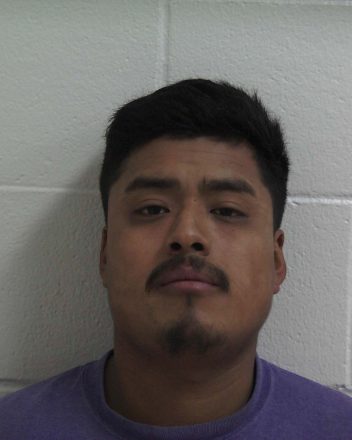 Decatur County Sheriff’s Office responded to a vehicle accident on Sunday afternoon after an intoxicated driver could not place how he ended up at the scene.

Phillips then made contact with the complainant, Caitlyn Marcos.

Marcos stated that she and her husband, Eliseo Rendon had an argument earlier that day and Rendon left their residence. Marcos attempted to locate Rendon and began calling him, when he told her he had wrecked his truck. Marcos went to the scene, where she saw her husband doing presumed cocaine and called police.

Upon talking to Marcos, Phillips walked to the vehicle that was involved in the accident and asked Marcos for consent to search the vehicle, as it was registered in her name. Marcos consented and Phillips found an empty bottle of Smirnoff inside the vehicle, along with a ripped section of a plastic bag containing small amounts of a white, powdery substance.

Phillips then made contact with Rendon, who was sitting in the backseat of Knight’s patrol vehicle. Phillips asked Rendon what happened and he stated he did not know and was not driving the truck. Phillips asked if Rendon had been drinking, which he said he had, but the bottle in the truck was from the night before.

Phillips asked Rendon how he arrived at the scene of the accident if he had not been driving, and Rendon told Phillips a friend dropped him off, but refused to name the friend.

Phillips returned to talk to Marcos again and asked why she believed her husband was doing cocaine. Marcos told Phillips when she approached her husband at the scene, she saw him consuming what she believed was cocaine with the key of his truck.

She went on to tell Phillips that is when she saw Rendon place the drug in his pocket, before trying to enter her vehicle. Marcos asked Rendon not to get in her vehicle, however he did not comply.

Officers explained to Marcos they did not locate any drugs on Rendon and did they have permission to search her vehicle. Marcos complied and they located a small, clear plastic bag containing a white, powdery substance in her glove compartment.

Officers then contacted DCSO, Adam Mobley, who arrived on scene.

Mobley said finding the drugs in Marcos’ vehicle, but trying to connect them to Rendon was a “tricky situation.”

Mobley noticed the plastic bag found had a pink marker like substance on it. He then returned to the crashed vehicle to look over the ripped section of plastic officers had found earlier. The ripped bag also contained the pink marker like substance on the outside and matched the type of bag the drug was in. He was then able to connect the drugs back to Rendon, which later tested positive for methamphetamine.

While Mobley was investigating, Phillips continued talking with Marcos and observed bruising on the inside of Marcos’ arm. The bruising was in the outline of a hand with markings of a four finger and thumb present.

Marcos divulged to Phillips that Rendon had caused the bruises on the night of March 14, while they were at Rendon’s parent’s house. Marcos said she and Rendon were arguing, when Rendon grabbed her and snatched her back while the kids were present.

Rendon was then arrested and charged with possession of meth, battery, open container, driving without license and cruelty to children.

This case ended one of the four felony cases Mobley worked over the weekend.

“This is not a normal weekend for us,” Mobley said. “I don’t know if it’s due to people being out of work and school, but these were all unusual circumstances.”

Mobley hopes this will not remain the situation while businesses and schools work remotely for the coming weeks.

Decatur County Sheriff’s Office responded to a shed fire on Cyrene Road on Friday, which led to the arrest of... read more