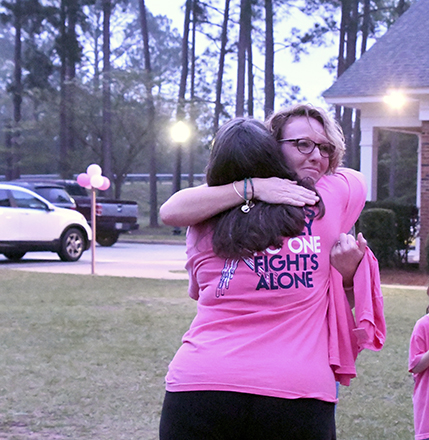 Valda Roberts hugs a first grade mother after being surprised with a fundraiser to help her.

Grace Christian Academy first graders surprised their classmate’s mother on Friday morning by organizing a fundraiser and wearing shirts to let her know she was not alone in fighting stage three breast cancer. Teachers, classmates and friends banded together to show that “no one fights alone in this family.”

Valda Roberts, mother of John Michael Roberts, has been fighting breast cancer since January and has to travel to Atlanta for treatment weekly.

Upon hearing this, first grade mother, Wendy Newberry, felt like Roberts really needed her GCA family to rally around her.

“One of the things about Grace is we are a family, and we really felt like it was important for our first grade family to support not only John Michael but Valma as well,” Newberry said.

That’s when the mothers banded together to create “The Pink Affair.” They are currently selling t-shirts and also raising awareness for monthly self-examinations.

The t-shirts cost $20 and are available to students, parents and the general public; all the money will be given to Roberts’ treatment. For those uninterested in buying a shirt, the order form also allows for donations.

In addition to that, mother Jessica Barwick is hosting a 31 fundraiser, where people can purchase bags and such on her personal Facebook page or at mythirtyone.com.

When Roberts walked into “The Pink Affair” on Friday morning, tears began streaming down her face as mothers hugged her and provided her and her family with shirts to wear, reminding them they were all in this together.

Roberts said she was so surprised and she is so thankful to everyone who put it together, and she really just wanted to reiterate how important self-examinations are.

Newberry said all the money raised from t-shirt sales and the 31 sale will be put toward Roberts’ next five months of treatment, and if they need to continue raising money following that they will, because one in eight women will be diagnosed with breast cancer and no one should have to fight it alone.