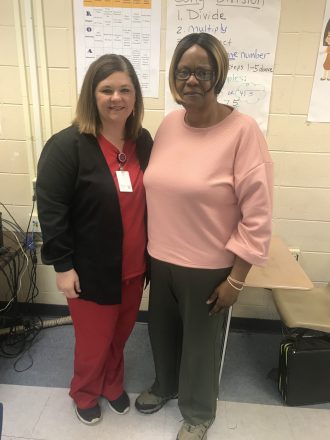 BMS nurse Carah Lynn and Tynesee Butler smile after Butler saved a student from choking due to training she received.

Butler said the school was serving small, bagged pancakes to the students that morning, when one child lost track of time and began scarfing the meal down too quickly.

Butler said the child arrived and was socializing with friends, when it became time for school to begin with the question of the day. Butler explained the school has been doing rewards as they prepare for the Georgia Milestone Assessment, so Butler was in the middle of reading the question, when a student alerted her that a young boy named Eli was choking.

“When I looked up, he (Eli) was standing up beating on the wall, trying to gain our attention because we were so engrossed in our question of the day,” Butler said. “But, he never lost consciousness; his face was just very red.”

Butler rushed over and turned Eli around to begin the training she received for the Heimlich maneuver. Prior to teaching, Butler worked at a hospital and said she had known the maneuver for almost 20 years, but never imagined she would have to actually perform it.

“It was like an out of body experience,” Butler said. “It didn’t feel like I was really doing this.”

While Butler performed the Heimlich, students ran to get the nurse, Carah Lynn.

Lynn said she was very proud of Butler, who responded well in this situation.

“I think I was just as scared as he was, but seeing the faces of the other students in the classroom, I knew I had to be the adult and stay calm,” Butler said.

Butler is also part of the first responder team at BMS. She, along with several other teachers and nurses have attended CPR and other trainings to help in medical emergencies.

Lynn said after this incident she believes everyone should be trained in CPR and the Heimlich maneuver, regardless if they are on the first responder team. Going forward, they have not discussed if every teacher will have to take these medical trainings, but they have insured that teachers who are certified are placed strategically around the building in the event of an emergency.

“This experience just really changed me,” Butler said. “It makes you thankful for each and every day.”

The student expressed to Lynn he was thankful to Mrs. Butler, and although he was shaken up he felt better and continued to participate in his regularly scheduled activities throughout the day.

Canines gather for afternoon with Dogs Playing for Life