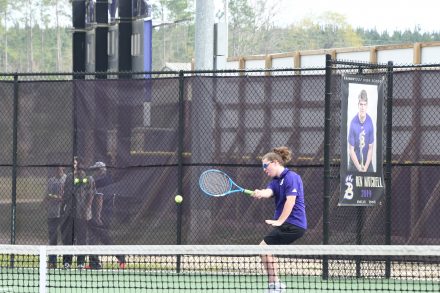 Number three singles, Cole Buchanan was on fire Tuesday afternoon, bringing in the only win for the Bearcats. Above, he returns a ball in the first set.

The Lady Cats and Bearcats tennis teams took on two opponents this week. They played Early County on Tuesday, where the Lady Cats made a full sweep and the Bearcats had a narrow loss, before playing Cook County away on Wednesday. Both teams brought home a win, proving they are ready for their region matchups.

With singles winning all their matches, doubles were determined to finish off the day with a sweep.

The Bearcats then took to the court, where they eventually lost 1-4.

Number one singles, Robert Bryan Shockley took to the courts first, where he went into three sets, hoping for a victory. He came up short 3-6, 6-2, 5-7. Number two singles, Austin Aldridge also came up short 2-6, 2-6. However, number three singles, Cole Buchanan brought home a win for the team.

Wednesday afternoon both teams were able to rally for a victory against Cook County.

Bell was especially proud of Tabb and Miller’s win.

“Today was Aiden and Calvin’s first time playing together and they stepped up in a huge way,” he said.

The Lady Cats then took their places for the matchups.

Bland showed no mercy against Mariallen Boling with a 6-0, 6-0 win.

Darley and Hall came up short in their match, giving Cook their first win in the girl’s division, 6-7, 5-7.

Bell said he was extremely proud of the Lady Cats.

“They bring their best each match and prove they are the team to beat,” he said.

Bell thinks both of these games improved the teams’ skills tremendously and that the teams are peaking at just the right time, as region play began on Friday.