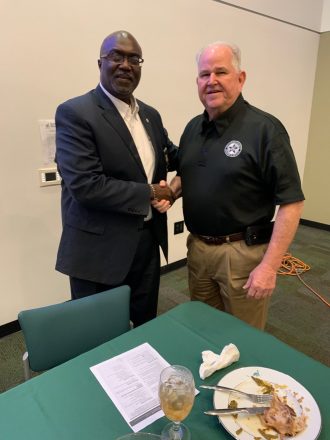 Warden Moses James of the Probation Substance Abuse Treatment Center located outside of Bainbridge on the old Southwestern Georgia State Hospital grounds, was the speaker at Bainbridge Rotary Club meeting this week.

He began his talk by saying how happy he was to speak to the Rotary Club, as he has spoken all over the state; but this is the first time to make a speech in Bainbridge.

In fact, he says many people don’t even know the facility is here.

He described the difference between how people with addiction were treated when he first began his career, saying all his caseloads were always in crises. They would be transferred to a state hospital, and as time went on, they were back again.

“We were treating the wrong things,” he explains. “We were treating addiction, instead of the underlying problems.” He said he eventually realized something was wrong in the system. Nothing was working to keep people from going in and out of correction facilities and mental hospitals.

Although offenders have a history of substance abuse, which was the causative factor of their being declared offenders, the program puts them through a process that includes psychoanalysis, individual counseling, work and vocational details. The underlying problems of anxiety, for instance, and other factors that trigger the substance abuse are explored.

James cited two relatives in his family who chose to quit drinking, and while remaining sober, still exhibited all the same behaviors of the addict.

At PSATC the probationers work and participate in intensive individual and group counseling sessions.

Currently there are 400 males in the Bainbridge nine-month treatment plan. “It can be completed in as little as nine months, or they can stay longer if need be,” explained James.

There is also a six-month program of after-care, where the probationer must attend supervised groups for continued therapy. If they satisfy all of those requirements, then they qualify for less restrictions.

“We aim to give them all they need to be able to live a good life in the community,” said James.

The program here has been so successful, that there are currently 500 people on the waiting list for admission, while other facilities are seeking and implementing similar changes in order to achieve success.

Admission is by court order and requires an assessment by Next Generation Assessment (NGA).