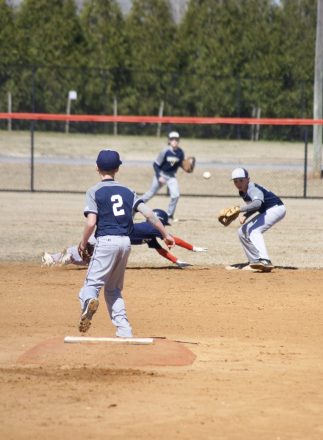 Owen Earnest on the mound, throwing back to Aiden Whittaker, who was playing 2nd at the time to push the runner back to base.

The game kicked off in the first inning, when the Eagles made an error and allowed for the Cougars to score two runs.

Following those two runs, the Cougars tallied three runs in the third inning. The runs were driven in by offensive knockouts, Hines Roberts, Graham Beckham and Hayden Cohen.

However, it was Aiden Whittaker who earned the victory for the Cougars. He surrendered two runs on three hits during the course of four innings, while striking out nine.

Keith Edison and Owen Earnest helped close out Whittaker’s game when they entered during relief.

Alex H. took the loss for the Eagles. He went four innings, allowing eight runs on five hits and striking out seven.

Beckham and Edison led the Cougars in hits, each managing two with the Cougars tallying nine hits throughout the game.

This was the Cougars’ first win of the season, but they are excited and hope it is only the beginning of a great season to come.