Canines gather for afternoon with Dogs Playing for Life 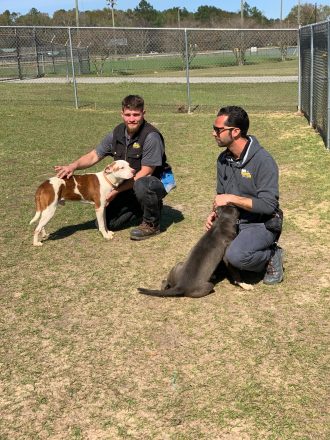 Workers at the Bainbridge-Decatur County Animal Shelter just wrapped up a five day training program conducted by Dogs Playing for Life. It is an organization founded by Aimee Sadler who saw the great need after working as a private trainer for years in shelters. It is rooted in the notion that a dog’s natural instinct is to play, and has grown into a nationally recognized effort to help dogs in shelters have happier lives and shelter workers have a calmer environment in which to work.

On Saturday, the DPFL trainers, Mike Kaviani, and Willan Sadler, demonstrated the training techniques used as they let six shelter dogs out into a newly created fenced-in play yard where they could be observed joyfully romping together in the warm sunshine— out of their crates— to show what can be accomplished.

The idea was brought to the Bainbridge Shelter after worker Chris Rouse, who has been with the local shelter for over three years, attended a training session at the Albany Animal Shelter about four months ago. “I was excited to have the program come to Bainbridge. It really shows who the dog is and how they play. They are much calmer after being outside,” he said. “It is good for us workers to see them out here being happy.”

Shelter Director Ashley White said at first she was put off by the cost of the program, thinking they could never pay for it; but they applied for and were awarded special sponsorships that made it possible to go forward.

The next step was to get the area fenced-in in time. Humane Society Board President, Dennie Nichols, undertook that project; and it was all properly installed the night before classes began.

Kaviani, the chief program officer, has worked with dog training for 15 years. As he was inside the play area with the dogs, he calmly demonstrated how to supervise and discourage inappropriate behavior if it would occur. He carried a very simple spray bottle filled with water and all it took on the one occasion viewed was a quiet shot to the face and calm prevailed.

The program has observed that some dogs suspected of displaying unpredictable behavior may be the first ones euthanized in order to make room for the dogs perceived as being more adoptable and safer for contact with volunteers and adopters. It further states that a dog deprived of regular exercise, mental stimulation and human touch can physically and emotionally decompose from the stress of being kenneled without any enrichment.

Sadler and Kaviani pointed out one particular dog, Tip, a large white and light brown bulldog mix in the Saturday group who was one who surprised them. Once he was outside and able to run and play his disposition changed.

Kaviani commented that he believed the training was particularly useful and necessary in this shelter as it has such inadequate resources and holding areas for the animals that make it even harder for the animals and the workers. He was pleased at how the workers responded to the training, and was so impressed with how hard they work with so few resources. White further commented, “It is not their fault they don’t have the ideal facility, but have to work with what we have. I was so impressed with the employees’ interest and how they took to the training.” She said they all came to work on Monday morning and immediately began utilizing all they had learned.

White says the goal is to get every shelter dog out to play at least once a day, and the good thing is that when they come back in they are tired and go to sleep.

She also expects the play area to be a good space for pre-adopters to come out and observe the dog(s) of their choice interact with other dogs—including dogs the adopter may already have.

All in all, this is a major step forward for the local Animal Shelter, and White and the workers are glad for the opportunity. “DPFL didn’t just come here and train for a few days and leave,” she explained. “They continue to be in contact with us for any questions or concerns we may have.”