Bainbridge baseball back on track after pair of region wins 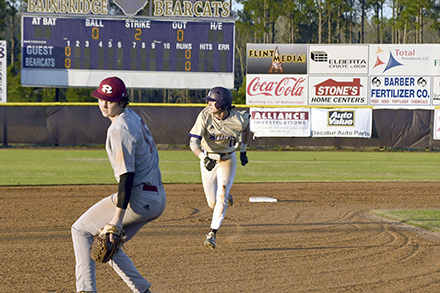 Mike Conder watches a hit from one of his teammates as he bolts to third base last Friday against Warner Robins at the Bearcat Diamond.

After a slow start in region play last week, Bainbridge stepped up to the plate and evened out its record (4-3, 2-2 region)with wins over Warner Robins and Veterans this past weekend.

Against the Demons on Friday night, the Bearcats added 4 runs to a 3-0 lead and squashed a Warner Robins rally in the seventh to win 7-1.

Bainbridge opened up scoring right away in the first inning when Quayde Hawkins doubled on a 0-2 count to score a run.

The Bearcats’ sixth inning was fueled by Varnum, who banged out an RBI double to lead the run scoring.

Colton Harrell was the winning pitcher for Bainbridge. He surrendered zero runs on two hits over five innings, striking out six. Hawkins threw two innings in relief out of the bullpen. Hawkins recorded the last six outs to earn the save for Bainbridge.

Cam Thrift took the loss for Warner Robins. He allowed five hits and three runs over three innings, striking out one.

Bainbridge totaled ten hits in the game. Mike Conder, Varnum and Harrell all managed multiple hits for the team. Harrell, Varnum, and Conder each collected two hits to lead Bainbridge.

The Bearcats showed no signs of slowing down the next evening at Veterans. Bainbridge was down 1-0 in the top of the fourth before pouring on 5 runs throughout the next four innings and allowing none from the Tigers.

Varnum started on the bump for the Bearcats and took the win. He surrendered just one run on five hits over seven innings. He struck out five and walked zero.

It won’t be long before Bainbridge plays Veterans again. The Bearcats will host the Tigers for a region doubleheader on Friday starting at 5 p.m. Bainbridge also hosted Lowndes County on Tuesday.