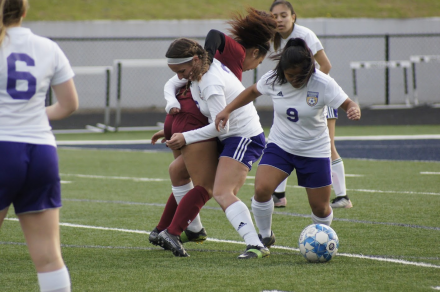 Evelyn Mach (9) dribbles the ball away from a group of players during the Lady Cats’ game against Warner Robins.

On Tuesday in a spirited contest Bainbridge took a 1-0 lead into the half, but the Lady Jackets battled back and tied the score in the second stanza forcing overtime.

With less than a minute remaining in the second overtime period Thomas County scored a goal for a 2-1 victory.

Bainbridge Senior Midfielder Taylor Emmons goal in the 17th minute,to  give the lady Bearcats a first half lead.

The goal was set up by Bainbridge Senior Forward Jamya Brinson who attacked the left side of the Thomas County defense before dropping the ball back to Lady Bearcat Wing Sarah Victor.

An alert Victor then found Emmons and crossed pass into the Yellow Jacket Penalty area.

Emmons, received the ball and quickly shot and scored from 14 yards out.

Six minutes into the second half, a Yellow Jacket midfielder intercepted a Bainbridge goal kick and lofted a scoring shot from 28 yards out to tie the score at one. From that point on both teams defenses stiffened creating an overtime period.

In both overtime periods neither team could cross a shot over and it was in the waning moments of the second overtime period that luck happened for the visitors resulting in a score..

Late in the contest the ball was knocked around before being sent forward to the Lady Cat defense. The well struck ball ricocheted off the back of a Bainbridge defenders leg to a wide open Thomas County midfielder, who alertly lofted a shot from 30 yards out that catching the Bainbridge GoalKeeper off of her line, and into the goal for the winning score with only 48 seconds left.

Ever resilient Bainbridge mounted an attack late, but just could not get an open opportunity to get a shot off resulting in the 2-1 setback.

Coach Ariail remarked “In both games I thought our girls did a great job battling for the ball. defenders Noelle Tyre, Sandy Baker, Maloree Inlow, Abi Surratt, Mckenna Stegall, and Ashton Brock hustled throughout both contest.”