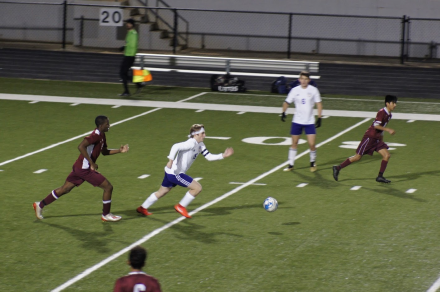 Andru Matthews takes off down the field with the ball during the Bearcats’ game against Warner Robins.

Last Friday night at the “MAC” stadium in Warner Robins, the Bainbridge High School Boys varsity soccer team rallied from a 2-1 halftime deficit, and countered with two second half goals to take a decisive 3-2 region victory over the host Warner Robins Demons.

The Bearcats struck first, in the 5th minute, as senior Midfielder Cesar Chiguil intercepted a Demon pass and lofted a 35 yard shot into the goal giving Bainbridge a 1-0 lead.

But the Demons countered in the 13th minute of the match, as a Demon Forward took advantage of a loose ball in the Bainbridge penalty area and quickly shot scoring from 10 yards out to knot the score at one a piece.

Warner Robins took the lead, two minutes later, as a Demon midfielder received a throw in and hit a well placed volley shot 30 yards to the right corner of the Bearcat goal, giving the hosts a 2-1 advantage that stood until the half.

The Bearcats tied the score in the 44th minute, as Bainbridge Forward Jose Avalo one touched a pass from Chiguil and scored from 14 yards out.

Bainbridge took the final lead in the game, in the 54th minute, the result of a corner Kick. Chiguil took a corner kick and sent the lofted ball curving to the backside of the Demon goal. Senior Defender Andru Matthews made a run toward the goal and headed it into the back of the nets. The score gave Bainbridge a 3-2 edge, that they never relinquished.

The game was tight, especially in the first half, with both teams attacking the opponents goal with numerous chances, but it was the visitors at the half who had a 2-0 edge.  In the second half Thomas County ,who had a 15-7 shot advantage, added three more goals for the win.

Prior to last nights game with Veterans, Bainbridge went into the contest with an overall record of 6-2 and 2-2 in region play. The Bearcats will travel to Albany on Tuesday to battle Dougherty High Trojans, while visiting the Worth County Rams in Sylvester on Friday.