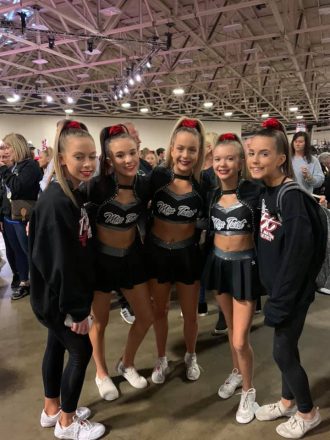 Two Bainbridge students traveled with their competition cheer team, Miss Twist and Team Midnight over the weekend to Dallas, Texas to compete in the NCA, where they placed second out of 12 teams from across the country.

Abbey Hall and Emma Ryan Shirley’s competition cheer team is out of Tallahassee. Hall has cheered for the team for a little over five years and practices twice a week with them, while Ryan has been there for two years. Hall is currently a flyer on the squad, while Ryan is the main base of the stunt group. Hall said the routine they rehearsed for the NCA competition has been an ongoing project since June.

The competition proved tough and Hall said on day one the team resided in sixth place, but were determined to move up their score on the following day of routines.

On day two, the team moved up four places and finished in second overall.

“Of course we wanted first, but we were happy we moved up,” Hall said.

With the NCA competition out of the way, Hall said they now begin preparing for their toughest competition yet- the D2 Summit.

The D2 Summit will be held in Orlando, Florida and feature some of the best teams from across the country.

Regardless of the routine and placement, Hall enjoys the competition for other reasons. She said her favorite part of Dallas was the ability to spend time with her friends from cheer and girls she’s only able to see at competitions.

Cheerleading is more than just a sport; it’s an opportunity to build friendships across the country.