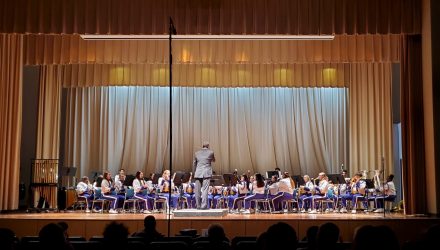 Wednesday, Thursday and Friday the Georgia Bandmasters Association hosted a band festival at Southern Regional Technical College, where more than 20 bands showcased their best work for a musical evaluation.

The Concert Band was directed by Will Parker and played a selection of three pieces: Rough Riders by Karl King/Swearingen, Ammerland by Jacob De Hann and Earth Dance by Michael Swenney.

The Symphonic Band also played three selections and was directed by James Sewell. They played The Trobone King by Karl King, Sleep by Eric Whitacre and Jubilateo: Fanfare and Allegro by Samuel Hazo.

Sewell explained they base their musical selections off of the standards set by the concert adjudicators, but always make sure the music showcase the student’s amazing talents.

This particular band festival is one of the band’s most important performances of the year, due to its evaluation. Sewell said it helps the program know what they are doing well and what they need to work on. He said it is how they evaluate their own program and see what they want to keep or change for next year.

The performances receive a rating of superior, excellent, good, fair or poor. Being rated superior is the highest score a band can receive and places the BHS bands among the very bands in the state.

“I’m very proud of all of our band students,” Sewell said. “They work very hard and push themselves daily to great things in and out of the classroom.”

“We couldn’t do what we do for our students without their amazing support for our program,” he said.

The Concert and Symphonic Bands will continue to improve and give their annual Spring Concert on May 7 at the BHS Gym.

Friday wreck sends one to hospital