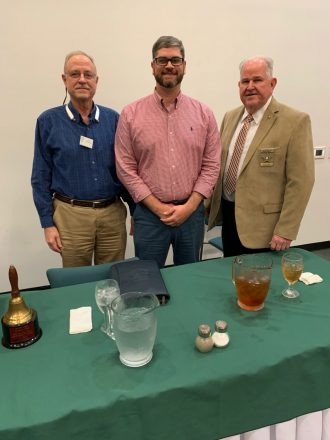 Decatur County Sheriff Wiley Griffin introduced Hank Day as the speaker at this week’s Rotary meeting. Day is an agent with GBI, who works out of a Thomasville office representing several Southwest Georgia counties.

Georgia Bureau of Investigation began in 1937 with one agent. The current agent count is 286.

Day explained the work of several units that make up GBI. Among them is a crime lab in Moultrie that does DNA and drug testing. Bodies are sent to Columbus for medical exams and autopsies. In the 1970’s President Carter created a division that has a wealth of information at their fingertips. In a traffic stop a patrolman or law enforcement officer can do extensive background checks on drivers and checking of tags.

There is also a drug unit in Albany, a commerce unit and financial unit.

One of the more prominent investigations is that of child exploitation from on-line sources.

Day stressed that he must be asked to come in on a case, usually by the Sheriff’s office, a judge or prosecuting attorney. He also added that in spite of what you see on crime shows, it takes on average six months to get a return on DNA testing.

The Historic Preservation Commission met Tuesday night, where they voted against First Baptist Church’s request to demolish 423, 429 and... read more