Friday wreck sends one to hospital 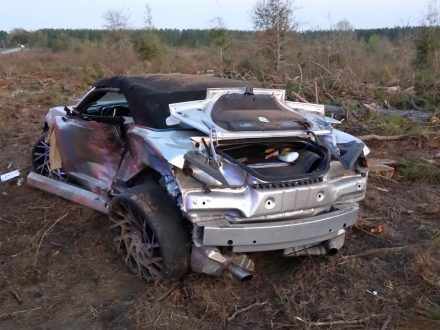 Terra McLeroy’s vehicle was struck on Friday at the intersection of John Sam Rd. and Spring Creek Road. The crash resulted in her being lifeflighted to TMH

Two vehicles collided at the intersection of Spring Creek Road and John Sam Road on Friday, February 28, causing a vehicle engine to catch on fire and one occupant to be lifeflighted to the hospital.

According to Georgia State Patrol reports, Ricardo Chanchavac was traveling south on John Sam Road, while Terra McLeroy was traveling east on Spring Creek Road. When approaching the intersection, Chanchavac failed to stop at the stop sign and struck McLeroy’s vehicle, causing both vehicles to spin onto the shoulder of the road.

While en-route, DCFR was informed that one vehicle was on fire. Upon arrival, units found Chanchavac’s vehicle to have a fire in the engine compartment on the side of the roadway. Chanchavac was trapped inside of his vehicle and had to be extricated.

DCFR was able to control the fire in less than three minutes, according to reports and began assisting EMS with injuries.

EMS requested life flight for McLeroy’s injuries as they appeared to be serious. The helicopter landed in the adjacent lot and took McLeroy to TMH for further observation. Chanchavac also had visible injuries and was taken by Decatur EMS to TMH for evaluation.

Following an investigation, Chanchavac was charged for driving under the influence, driving without a license, failure to stop at a stop sign and reckless driving. He was booked into the Decatur County Jail with a bond of $2,600.