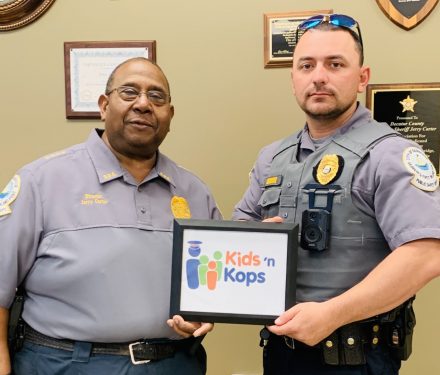 Bainbridge Public Safety Director Jerry Carter is pleased to announce he has appointed Captain Tim Mixon as the new head of the Kids ‘n Kops Program.

Carter stated, “Captain Mixon, who has been with Public Safety since 2012, is enthusiastic about the future of the Kids ‘n Kops program, and already has several exciting events planned that we know the community will enjoy.”

The Kids ‘n Kops program, which is run entirely on donations from community partners, was started in 2014 by Sergeant David Cutchin who saw a need to create positive relationships between law enforcement officers and members of the community.

The mission of Kids ‘n Kops has been accomplished through the hosting of events and activities during the year such as the annual Fun Day at the Boat Basin, golf tournaments, and movie nights. Anyone wishing to become a Kids ‘n Kops community partner is encouraged to contact Captain Mixon at tmixon@bainbridgecity.com.

Savannah Padgett, a student at Abraham Baldwin Agricultural College, will compete for the title of Ms. ABAC along with 19... read more