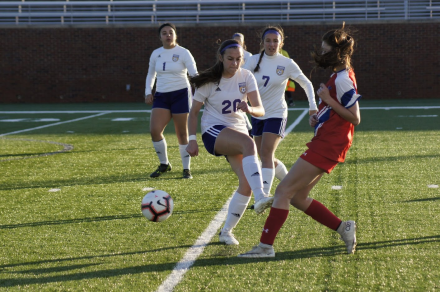 Abi Surratt (20) battles a Veterans player for the ball while Sandy Baker (7) and Noelle Tyre (1) look on.

The Bainbridge Lady Cats scored seven first half goals in route to a 9-0 victory over Brooks County this past Tuesday night at Centennial field.

Bainbridge scored their first goal in the 12th minute as Sophomore Midfielder Anna Kate Littleton received a lofted pass and redirected with her upper body into the goal from 3 yards out. Sophomore Evelyn Mach was credited with the assist.

The lady Cats increased their lead at 2-0 in the minute, as Senior Midfielder Taylor Emmons scored on a curling direct Free kick from 23 yards out. The kick was the result of a hand ball penalty by a Brooks County defender.

Senior Forward Jamya Brinson scored the Third Bainbridge goal in the 18th minute, as she intercepted a ball just outside the Lady Trojan penalty area, dribbled in and hit a scoring shot from 12 yards out.

Mach picked up her second assist on the night as she found Brinson on a through ball deep into Brooks County territory, in which she promptly delivered a 10 yard scoring strike in the 20th minute to widen the Bainbridge lead at 4-0.

Goal number five came following a foul by a Lady Trojan defender, in the 29th minute, who had tripped Mach just outside the penalty area. Emmons again struck the back of the nets, on a Free Kick, this time from 28 yards away.

The Lady Cats maintained their aggressive prowess as they scored less than 40 seconds later as Littleton assisted Mach to make the score 6-0, After receiving a pass from Littleton, Mach quickly turned and shot from 25 yards out at the goal. The Brooks County Goalkeeper made an attempt to stop the shot, but the ball spun underneath her and into her goal.

The Final first half goal, came at the 38th minute mark, Brinson found as Emmons in the Brooks County penalty area and scored from 12 yards out, completing a Hat trick on the night.

In the second half Bainbridge scored only two goals, but both were by Brinson to give her a hat trick and four goals scored on the night.

Junior Midfielder Sarah Victor assisted Brinson in the 48th minute, on a breakaway, while the final goal by Brinson came as the result of an intercepted goal kick that she quickly put away in the 57th minute, giving Bainbridge their final 9-0 score.

Despite being defeated in region play by Veterans 5-1 last Friday in Warner Robins, the Lady Cats gave a tremendous effort against the defending 2019 region champion.

Warner Robins scored two first half goals in the last 14 minutes to take a 2-0 lead despite a great first half effort by Bainbridge and three chances that just missed the mark by the Lady Cats. The Lady Warhawks were able to score three more goals in the second half, but Bainbridge responded with one of their own.

In the 56-minute, Senior Center Back Noelle Tyre sent a long pass splitting the Veterans defense to Brinson who delivered a shot from the top of the penalty area just past the onrushing Veteran’s goalkeeper for Bainbridge’s Lone score.

Prior to last night’s game with Warner Robins the Lady Cats have an overall record of 3-2 on the season.

Bearcat soccer off to hot start

The Bainbridge Bearcats varsity soccer team is off to a hot start, sporting a 5-1 overall record after six games... read more