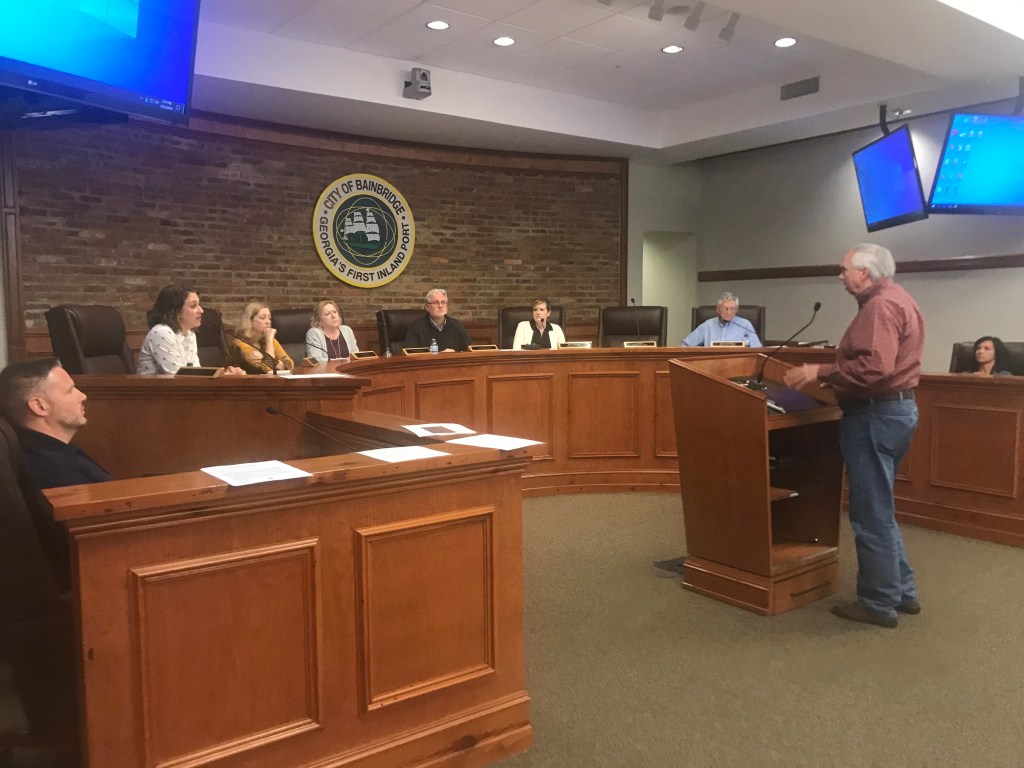 Mike Wiggins of First Baptist Church speaks to the Historic Preservation Commission about the structural damage of the homes.

Elrod presented his idea to the commission and a packed room of interested citizens first.
Elrod explained to the commission that when he purchased the home on 220 W. Broughton Street it had already began deteriorating, but it has only gotten worse. As time has gone by, he has decided he would like to remove that property and build apartments. His interest for apartments peaked when the Chason Park expansion began; he thinks the homes would be accessible to the Riverwalk and a desirable place to live.

“The apartments I want to build, I personally want them to look like they belong in Bainbridge, Georgia,” Elrod said. “I want them to be brick faced buildings and each one of them to have their own unique look, just like the buildings in downtown Bainbridge do.”

Elrod proposed to call the apartments the Rivertown Flats and have them be luxury downtown apartments. Elrod showed the commission a rendering of what he was proposing and how each unit would have a different façade with the final unit having a façade that matches the brick color and style, along with similar window units from the old library.

Elrod then showed a 3D rendering, showing how the units would look on the current lot, but explaining until everything was perfectly measured he could not say if it would be eight units or ten.

“I’m sure there will have to be adjustments made because of the retention ditches,” Elrod explained.
While Elrod did have a vision for what he planned to do with the lot once demolished, he wanted to explain why he couldn’t just fix up the current property. He purchased the property for $60,000 and told the commission when he purchased it, he knew he wasn’t buying a house. He said he was surprised the house had not already been condemned. He wanted the land.

Elrod received two bids on what it would cost to bring the home up to code, if he were to not demolish it. The low bid was $185,000 and will still require remaining repairs, such as the sagging foundation. In addition to those costs, Elrod also received a bid for mold remediation of the home for $75,000. Elrod knows these costs are only the beginning and he believes it will go above the predicted amount in order to fix the home, which is why he would rather demolish it and build anew.

Community and Economic Development Director, Steve O’ Neil explained to Kirbo that Elrod’s plans align with the direction the city is trying to go in and they would most likely grant Elrod a rezoning if passed.

Kirbo then asked Elrod if the renderings he proposed were an idea or had plans been drawn out.
Elrod explained plans had been drawn up, including floor plans by Dowco. Elrod said each unit is approximately 1,400 sq. ft. and went into more detail about the interior and where each room in the house would be located.

Commissioner chairman, Darrin Blankenship told Elrod he did not feel comfortable giving him a certificate of appropriateness for the flats without seeing more information and a structural engineering report of the current building.

“Once I give you that it’s a green light, and there are concerns with the façade and the architecture,” Blankenship said.

Kirbo emphasized that next time she would like to see a fully developed plan, including parking spots.

Blankenship made a motion to table the conversation in order to give Elrod more time to develop his concept and provide a report.

Charles Tyson then spoke on behalf of First Baptist Church in request to the demolition of 423, 429 and 433 E. Shotwell Street. He squashed rumors it was to be used as a parking lot and assured commissioners they wanted to use the property as a green space with a gazebo.

Tyson said they received the property in 2007 as a gift from a church member. He said they always knew they would not need the buildings, but would need the land.

Tyson said they have tried to give the buildings away in hopes someone will move them to an alternate location, but soon found out why there were no takers. The cost to move the building was $190,000 and then to repair the building and get it up to code costs over $600,000, according to Tyson. However, the building is only appraised for $535,000, so there is a net loss.

Along with the property being a bad investment, Tyson also told commissioners that the property has brought unwanted guests that are a danger to the surrounding homeowners, which is something they have had to deal with over the years.

Following, Tyson’s presentation, Downtown Development Authority director, Amanda Glover read letters which she received that pleaded with the commission to deny the request.

The first letter came from the Georgia Trust for Historic Preservation. They pointed out the importance of the two-story home and asked that it be preserved for future generations. They then stated in the letter they have a revolving fund, where they offer to sell buildings all across Georgia and a magazine where they publish historic properties for sale. They offered their services to the church and provided contact information.

Glover also read letters from current and past residents, Rollins Miller and Brandon Ingram.
Ingram cited the architecture in the historic homes that led him to his career as a home designer and the imprint the homes leave on the town and everyone who passes through. Miller cited several reasons, but believed that the desire for homes in downtown Bainbridge was as strong as he had seen in his lifetime, and the homes should be converted into residences for those who would like to live there and would maintain the dignity of the homes.

Kirbo asked Tyson if they would consider selling the property, but Tyson said all they want is the land, and they cannot do what they intend with the houses there.

Blankenship then questioned if they only wanted the land was the plan all along to neglect the homes so that they would one day have to be demolished. The church said they could not speak to that, as they were in bad shape when received and have only gotten worse since Hurricane Michael.

Following the questioning of the church and the petition to deny, church member, Tommy Wheeler spoke in favor of the demolition.

“I believe we are representing something more important than just a building, we are representing our Savior, our God,” Wheeler said. “He’s not a junky God and he doesn’t do things in a junky way, do you really believe if He were to come back to Earth today he would want that in front of His house?”

Wheeler asked the commission to find it in their heart to please help their church and the youth.
Tyson made one final argument, saying the church wants the land to train the young people about Christ.

Hearing all the arguments, Blankenship made three separate motions to deny the request for demolition, as it was incongruous to the surrounding properties and communities before adjourning the meeting.