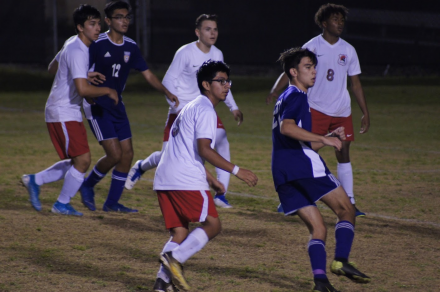 Jabez Minnis (2) and Juan Escamilla (12) work through crowd of Brooks County players to get the ball.

Bearcat soccer off to hot start

The Bainbridge Bearcats varsity soccer team is off to a hot start, sporting a 5-1 overall record after six games while sporting a 1-1 region record within the span.

In the opener in Vienna against Dooly County Bainbridge took a 5-0 first half lead on their way to an 8-1 victory. Junior Forward Jose Alvalo and Sophomore Forward Mason Ard each scored two goals in the win. Seniors Cesar Chiguil, Stokes Moore, Joe Emmons, and Junior Ashton Matthews each scored a goal in the game, Alvalo picked up 2 assists with Emmons and Ard picking up one a piece.

In game two the host Bearcats again sent a scoring barrage as they blanked Americus-Sumter 10-0. Ard and Alvalo again led the team by each scoring a hat trick with three goals apiece.

Right behind the leaders was Chiguil who added two more and an assist.Also scoring in the contest were Junior Aiden Matthews and Sophomore Luke Emmons. Seniors Nix McIntosh, Moore,and Joe Emmons each garnered 2 assists a piece..

In game three the Bainbridge hosted Region foe Harris Countyand in a pressurized game the Bearcats pulled a thrilling 1-0 victory at Centennial field. The lone game winning goal came from Senior defender Andru Matthews.  Freshman Goalkeeper Dax Willis had an excellent game with 5 saves including a penalty kick attempt save.

The Worth County Rams came to Centennial Field next and were defeated 6-0 by the Bearcats.

Ard and Chiguil led the way with each having three goals and two assists in the victory. Alvalo also chipped in an assist.

The lone Bearcat defeat came last Friday against Veterans in Warner Robins, as the homestanding War Hawks were precise with their shots in an 11-1 victory. Mcintosh scored Bainbridge’s lone goal being assisted by Chiguil.

This past Tuesday the Bearcats defeated the Brooks County Trojans by a tune of 3-0. Ard, Alvalo and Senior Juan Escamilla each registered a goal in the win. Freshman Goal Keeper Parker Lowe registered a Shutout in the win.

Bainbridge travelled to Warner Robins for a region game last night and will host region opponents Thomas County and Veterans next Tuesday and Friday respectfully.

This has been an exciting offseason for Georgia fans. Following right on the heels of pulling the nation’s No. 1... read more