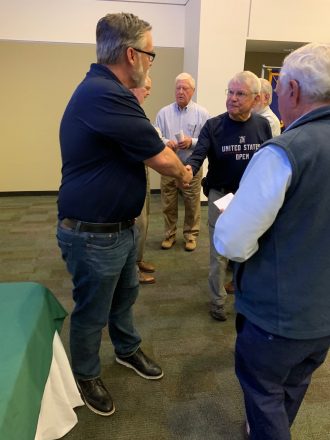 A group of Rotarians gathered around David McCollum after he finished his presentation to Rotary on Tuesday. Pictured above, Brown Moseley can be seen shaking McCollum’s hand.

He spoke of the many details involved in overseeing the construction of the new plant here, while still keeping things going in Miami until such time as the move could be made.

Things that needed to be managed were making sure the move had zero impact on company sales, how to maintain project timing, and looking after their employees. The Miami plant was located in an old building that had inadequate space and the station locations were not efficient.

McCollum showed an interior drawing of the new Bainbridge building with the proper flow of product and materials from beginning to end, to the warehouse and shipping. There is a completely different area for testing, with the warranty and repair area located next to the range.

The company offered the Miami employees opportunity and assistance to relocate to Bainbridge and he reported between 60 and 70 percent chose to move. Prior to opening the company held a job fair at the Kirbo Center with a huge turnout.

McCollum was asked if Taurus had found the local workforce to be satisfactory, and he replied, “It is absolutely satisfactory.” He explained that even before the plant was ready for occupancy, the Southern Regional Technical College Quick Start program set up trial assembly line for training purposes, and moved them on to the building when completed.

There are now seven assembly lines going and the current workforce is 195 employees, with 20 working the second shift. McCollum said they are in the process of hiring 16 new employees and plan for 10 more by the end of March. That will bring the number to 221. He said the company is also working on three new projects that are estimated to bring the total number of employees over the next three years to 350.

“We are also working on suppliers to come here,” he said, noting that there was nothing to be announced at this time.

In closing remarks, McCaskill said “Taurus has placed a tremendous spotlight on

Bainbridge not only in industry, but in the growth of the downtown businesses.”

Both men expressed their thanks for the cooperation and assistance they received from governments and other resources.

Harvest House of Hope Director, Cissie Franklin spoke to Kiwanis Club on Thursday about the nonprofit organization’s goals and how... read more