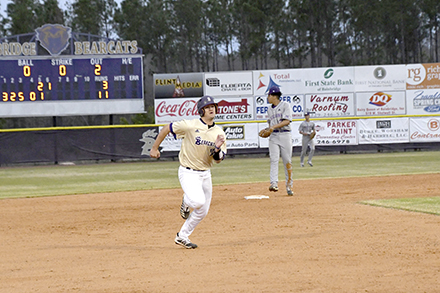 Nolan Barr hustles to third base during Monday’s game against Marianna at the Bainbridge Diamonds. Barr was a double away from hitting a cycle.

Bainbridge player Nolan Barr just needed a double to complete a cycle in the Bearcats’ 12-5 win over Marianna on Monday.

He had to settle for hitting two home runs instead. Not such a bad trade off.

Barr went 4-of-4 at the plate with 3 runs and 5 RBIs to help push Bainbridge (2-1) to the win. Bainbridge’s game was moved up to earlier in the day before expected rain hit the region, potentially resulting in the Bearcats’ fourth rainout of the season. Bainbridge finished the game before the weather hit and celebrated a much-needed win as the meat of its region schedule approaches.

“It was a win,” said coach Donnie Coxwell. “It was a good win. Everybody got to play. We had three rain outs. We have some guys who have been practicing all year and haven’t had a chance to play. They got a chance to play tonight.”

The Bearcats recorded three errors, but Coxwell chalks that up to the lack of playing.

“A lot of it has to do with us not being able to be on the field,” said Coxwell. “It’s been raining so much and our field is so muddy, we just haven’t been taking ground balls. Our pitching wasn’t as sharp, but again, I’m going to say that was from not seeing live hitters. We needed this game. We needed to play.”

Marianna scored three runs in the fifth inning, but Bainbridge still managed to pull out the victory.

In the first inning, the Bearcats got their offense started. Barr drove in three when he homered.

Hawkins was credited with the victory for Bainbridge. He went four innings, allowing zero runs on one hit and striking out four. Conder, Barr, and Jackson McCullough all put in work in relief out of the bullpen, steering their team towards the victory. Brantley Willis led things off on the pitcher’s mound for Marianna. He surrendered four runs on three hits over one inning. Cole Nobles, Blake Barber, Blayne Hewett, and Bo Ham each entered the game as relief, throwing one and two-thirds innings, one and one-third innings, one and one-third innings, and two-thirds of an inning respectively.

The Bearcats were scheduled to play Thomas County Central on the road Tuesday, but weather had moved the game to Wednesday. Bainbridge will host Harris County this Friday. First pitch is 5:30 p.m.