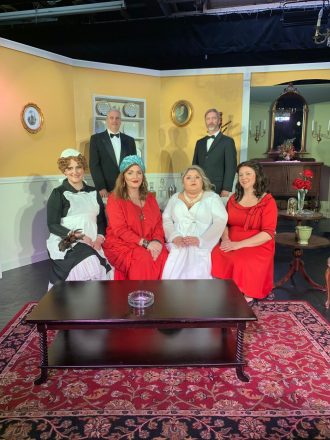 The cast of Blithe Spirit, in front, from left: Krysti Ramer, Megan Wimberley, Kyrstal Apke and Rachael Herendeen. In back: Stephen Mayfield and Eric Gay. Not pictured: Marjorie Mayfield.

Shake the wintertime blahs and add some English comedy to your life this weekend when the Bainbridge Little Theatre presents Noel Coward’s Blithe Spirit.

The play is set in the home of Charles Condomine, a novelist, and his wife Ruth. They invite a clairvoyant named Madame Arcati, to their home to conduct a séance. They include a couple of their friends, Dr. and Mrs. Bradman, to come for dinner and be part of the session. Condomine is hoping to get some inspirational material for his new book.

The fun begins when the medium inadvertently summons forth Elvira, Charles’s first wife, who has been dead for seven years. As only Charles can see and hear her, Elvira proceeds to disrupt Charles’s life and home, and that is when things get complicated.

This play was first performed in June 1941, and has become a classic favorite of community theatres across the United States and Europe.

This is the second time BLT has produced it.

The cast includes: Eric Gay as Charles and Rachael Herendeen as his wife Ruth. The role of Madame Arcati is played by Megan Wimberley; and the couple’s friends are played by Stephen and Marjorie Mayfield. The ghost of Elvira is Krystal Apke, while the role of Edith the maid is played by Krysti Ramer.

The set is beautifully made and decorated, setting perfectly the tone as home of a wealthy English socialite.

Opening night at BLT is Thursday, Feb. 27 at 7:30 p.m. and the show will continue Friday and Saturday nights, closing with a Sunday matinee at 2:30 p.m.

Tickets are available at the door, or can be reserved by emailing bainbridgelittletheatre@gmail.com.

A continuing effort to save more dogs in a better environment is being undertaken by the Bainbridge Animal Shelter. They... read more