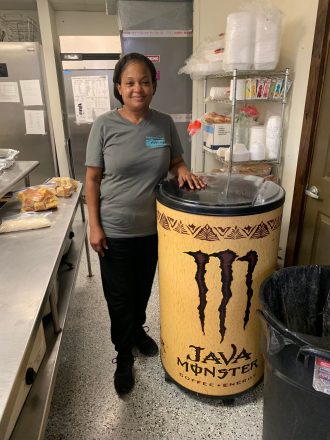 At ‘home’ in her kitchen, Janice Lewis stands beside a large drink cooler she uses when catering events.

She grew up cooking, beginning at age 9-1/2, and has been cooking up a storm, non-stop ever since.

Janice Lewis-Owens, who has owned J-LO’s for four years, learned to cook from her mother, Pearlie Mae Lewis, and grandmother, Estella Baker, perfecting the traditional Southern style recipes of fried chicken, macaroni and cheese and her signature caramel-pecan pound cake – her most requested foods.

But she doesn’t stop there. She can cook any recipe and has proven it repeatedly.

Most recently she has catered some staff meetings for Taurus Manufacturing, where she is said to have turned out some authentic Cuban dishes.

On Friday nights she serves up a seafood menu to the public from 5 to 9 p.m.; then is open on Sundays from 11 a.m. to 3 p.m., offering a traditional menu.

Add to that the fact that the building is available to rent for weddings, showers, birthdays and meetings—and she cooks for those.

“I’d rather cook than anything else. It is therapy for me,” confesses Janice, who adds with a chuckle, “I can always talk to the food and it doesn’t talk back.”

When asked how she prepares such large amounts of food at a time, she replies with a laugh, “I cannot do small portions.”

This past year she doubled the size of her kitchen and eating area, and it seems to inspire her to cook even more.

She says she gets up early (3:30 to 4 a.m.) daily, and gets to the kitchen to start the vegetables, then cleans chickens and whatever else is on the daily menu. She has three regular helpers who come in about 9 a.m. and take over their cooking jobs. For Sunday’s meal she begins at midnight Saturdays. She does use slow cookers for some of her meat dishes and for the baked chicken.

Both Janice’s parents worked at Amoco Fabrics on different shifts. As Janice was born in the middle of seven children, she began taking care and cooking for the four siblings behind her while her parents worked.

She married four days after graduating from Bainbridge High School in 1983, and had three daughters. Her husband was in the military and she followed him in his assignments. After 18 years of marriage that dissolved in divorce, she moved herself and children to California for a few years, where she worked as an assistant marketing director for a publishing company, still cooking for church groups and military families.

She has a great devotion and appreciation for those who serve in the military. Her father, Nehemiah Lewis, retired from the military before coming to Bainbridge to work at Amoco. Many of her siblings and some of the children also served or are still serving in the military.

Janice and her children returned home to Bainbridge when her mother became ill. She went to work at 911 as a dispatcher —still cooking for church groups and work associates.

Actually, she still works at 911 part-time, when she isn’t in the kitchen.

In December 2019, Janice married Mario Owens, thus the name of her business JL-O.  She happily added another daughter to the family, who also works for her.

There is no doubt that Janice comes from a hard-working family, and gets her own work ethic from her parents. She grew up hearing, “As long as you can breathe and move around, you go to work.” Most of the family members have two and maybe three jobs at a time — as does Janice.

Oh, and Janice is now helping to raise grandkids. Her granddaughter, now 13, began helping with the catering jobs at age nine, and a 15-year-old grandson is now working there part-time.

If you feel exhausted after reading about all this work and wonder, how the heck she manages to do all this. She has but one answer. “My biggest help comes from the Lord, my God.”

Janice Lewis-Owens is living testimony to what one can accomplish if you apply yourself.