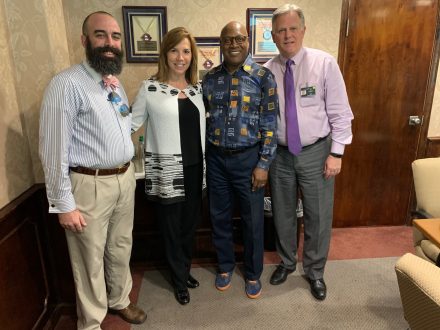 Hospital Authority welcomes Dr. Matthew Buck, left, as new Chief of Staff; while Authority President Glennie Bench and CEO Jim Lambert extend their thanks to Dr. Winston Price for his dedicated service in that position for the past two years. Both men are pediatricians at Memorial Pediatric Center.

The position of Chief of Staff acts primarily as a liaison between the Board of Directors and the medical staff, handling such matters as quality and care of patient issues and credentialing of medical staff members. He is an ex-officio member of the hospital board and serves on the total quality management committee as well as other committees vital to the ongoing care provided by the staff, according to information provided by Glennie Bench, president of the hospital authority.

In other business, the key indicators for the month of January reported another good month financially for the hospital—with a net income of $218,204 for January 2020. CEO Jim Lambert indicated the figure was about one million dollars better than this time last year. Although patient census numbers in several departments were down, emergency room visits were up and received good reports. Deliveries held steady, with 32 babies born in both December and January.

Lambert also presented a proposed budget for Fiscal Year 2020-21, which he described as a break even year. It was approved by the board.

There were no requests for capital improvement purchases this month.