BPS investigating box of malnourished puppies dropped off at headquarters 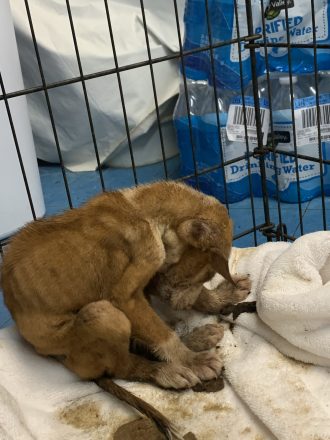 The sickest puppy in the litter was sent to rescue for veterinary care.

A very sad story appeared on Facebook this week concerning a litter of seven puppies illegally dropped off at the Bainbridge Humane Society Shelter parking lot sometime around 7:30 p.m. Monday night. This is the estimated time after viewing the camera security system.

According to Animal Shelter Director Ashley White, four were found in a metal “kennel” and three were loose in the parking lot.

As White received a call from a rescue friend about another matter, she told about finding a pup in such bad shape. The friends at the rescue willingly took the sickest pup to the Leon County Humane Society where it has been placed in immediate veterinary care.

White says all of the pups are very malnourished and have mange. “These are conditions that did not just suddenly appear,” she explains; “but are signs of long term neglect.” She added that while it is the Humane Society’s role to help animals, there is a right way to do things. A state law makes it illegal to just drop off animals after hours.

There is a video of the vehicle that dropped off the pups. It is being reviewed by Bainbridge Public Safety, which is now in charge of the case.

The public is requested to come forward with any information they may have that may lead to the arrest of the persons involved in this crime.

DCFR hopes to raise interest in EMT with free…