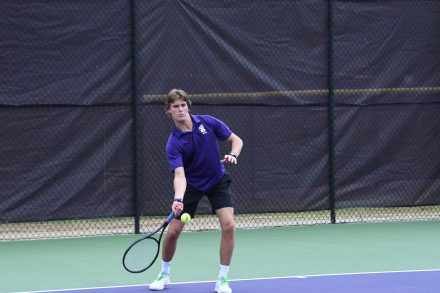 The Bearcat and Lady Cats tennis teams took on Dothan High on Tuesday, where they dominated 5-0, 4-1 in their second home match of the season.

“Dothan is normally a strong program and so is Northview, so when they merged we knew it would be tough competition,” she said.

However, the tough competition was no match for either team.

“Mikey really stood out in her match,” Thomas said. “Her competitor was very seasoned, but she handled it like a pro.”

Thomas went on to say that filling the shoes of last year’s number one singles spot, Sydnee Burke, has been difficult but Harrell has handled it with ease.

However, Thomas was still very proud of Bland.

“She was playing a senior and sometimes experience just has an edge,” Thomas said. “She did great in her third set; it could’ve gone either way. They went tit for tat.”

Still ahead in singles, number one doubles team, Sarah Caroline Darley and Anna Marie Hall took to the court, where they played three sets for a win. They eventually won 4-6, 6-2, 10-8 against Gabby Cooks and Brandi Smith.

With a win for the Lady Cats, the Bearcats went into their matches ready to dominate and they did.

“A 5-0 win at home is good anytime,” Thomas said. “Especially with all our new talent.”

“The singles did a great job and really kept up the momentum,” Thomas said.

The doubles ended the night on the court with a win.

Thomas was pleased with everyone’s performance and said this match really shows what’s to come this season.