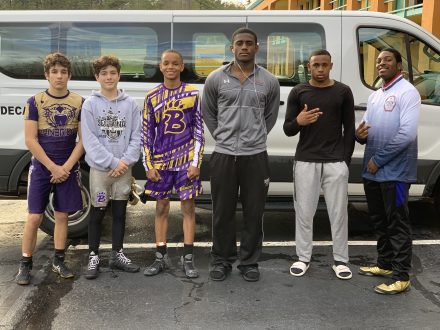 The BHS wrestlers who advanced to the GHSA State Finals, from left: Daniel Riche at 126, Lawson Singleton at 113, Malcolm Spann at 106, Arkeavious Marshall at 220, Bryan Washington at 160 and Josh Fillingame at 170.

Bainbridge hasn’t advanced a freshman wrestler to the State Finals since 2008, after GHSA implemented another round before the state finals that kept many of the Bearcats’ freshmen from making it to the final round.

“These 3 guys are the future of BHS wrestling, to have such a young talented core of young guys is key to our success,” said coach Chad Smith. “I am super proud that we can take kids with less than half the experience of other teams and still compete at the highest level.”

At the GHSA State Finals, the top 16 of a 54-man field from the first round of the state tournament compete. Advancing and competing for the Bearcats were Malcolm Spann at 106 (weight class), Lawson Singleton at 113, Daniel Riche at 126, Bryan Washington at 160, Josh Fillingame at 170 and Arkeavious Marshall at 220.

Arkeavious Marshall was the lone senior representative of the group. While dealing with strep and an injured shoulder, he competed well and finished 10th of the field of 54.

Final placements for the rest were Malcolm Spann at 10th, Lawson Singleton at 12th, Daniel Riche at 12th, Bryan Washington at 10th, Josh Fillingame at 12th and Arkeavious Marshall at 10th.

Smith expressed his excitement for the future of wrestling in Bainbridge, especially with the new youth program started this year by the Bainbridge-Decatur County Recreation Authority.

“This year the city has started a youth program, so maybe we can level the playing field in the next couple of years,” said Smith