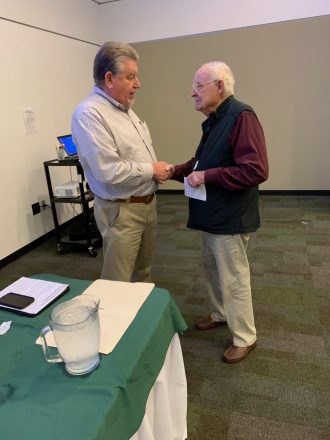 Tommy Dollar greets Vance Custer following the program, and gives him a few pointers on how to proceed with recovering help with timber losses.

Tommy Dollar may have sold his business Dollar Farm Products to RW Griffin, but he remains the voice of Agriculture for Decatur County, and Southwest Georgia, especially as the link between the farmers and state and federal government.  He works to tell the right story to political people.

One of his goals is to find relief for those who believed they would receive help from the Federal government following the disaster. But, he makes a point that they have not and probably will not. Most had a certain amount of insurance per acre on their cotton crops, but like most insurance coverage, they are only paid for a portion of their losses.

He described a Ga. Dept. of Agriculture Block Grants, a project on which he serves on the committee. He said they will soon start taking applications on block grants to distribute $340 million dollars to the recipients who fit certain criteria and payment limits. The sign up period will be for three weeks, and when it is announced locals are urged to sign up right away. He credits the help of Agriculture Commissioner Gary Black for getting this off the ground.

There is also a plan for a Georgia Hurricane Concert, Grand Ole Country Nights for the benefit of agriculture, and especially to help with mental health issues that have resulted in the heavy cash losses sustained by farmers. Dollar said the idea came from Sen. Dean Burke and other senators and agriculture friends throughout the state.

With regard to the water wars seen over the past years with Florida and Alabama, Dollar says Georgia seems to have prevailed in the last Supreme Courts report.

Speaking on future crop profitability, Dollar proclaims Peanuts are King, have always been King in Southwest Georgia and the immediate future looks promising. Other crops mentioned: cotton, corn, sweet corn, tomatoes and even the new thoughts on the prospects of growing hemp and medical cannabis are all dependent on supply and demand, as always.

Dollar elaborated on the future of growing hemp in Georgia, saying Gov. Kemp has named a Georgia Cannabis Commission, composed primarily of medical personnel, to help set up rules for growing hemp for medical purposes. Explaining that Georgia does not want to make the same mistakes as some of the other states, there will be six producers chosen for Georgia, and all will be closely monitored to grow it for medical purposes only.

Dollar said he is often asked by people what he is doing now. His response is “I’m doing what I do best—talking.” He is in nearly daily communication with Sen. Dean Burke and newly elected Rep. Joe Campbell to continue to keep the state of Southwest Georgia in focus.

Before closing, Dollar showed a special video developed by his daughter, Anna Beth Kinchin, who designed it for the Chamber of Commerce to promote Agri-tourism, and especially create a draw for Rivertown Days. “Live it—Enjoy—and Love it” portrays scenes set to appeal to the senses of sight, sounds and scents of our region of South Georgia and our river community.

Dollar says he wants it to be his legacy, that he promoted plans and projects that would help not only farmers, but all other businesses in the region.