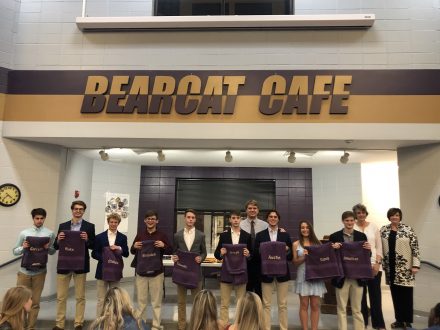 SwimCat seniors are recognized by their coaches.

The SwimCats and Lady SwimCats celebrated a successful season at the teams’ banquet on Tuesday, Feb. 11.

To be a Scholar Athlete, the student must have a 90 or above GPA and have scored at least a 1000 on the SAT or a 21 on the ACT.  Scholar Athletes for the SwimCats were Austin Aldridge, Sandy Baker, Jonathan Farrington, Blake Lowe, Hayden Martin, Brenden Mitchell, Stokes Moore, Paige Overman, Viviana Schuyler, and Garrett Sigman.

Thanks to a donation from Envision Credit Union, the female and male swimmers with the highest GPA were recognized as Academic Award winners.  Paige Overman and Garrett Sigman received this honor. Swimmers who scored points at Region then received medals.

Finally, the seniors were recognized.