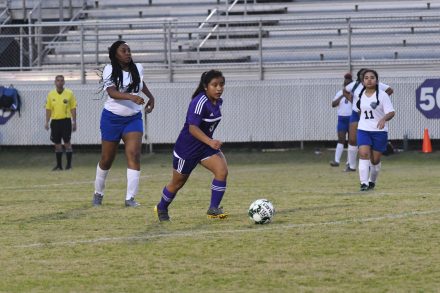 The Bainbridge Lady Cats varsity soccer team opened their season with an impressive win by blanking the Lady Panthers 10-0 Monday at Centennial Field.

Senior attackers Jayma Brinson and Taylor Emmons each registered a hat trick in the victory.

Emmons lofted a free kick that deflected off of the Lady Panther Goalkeeper and right to Brinson who scored from 10 yards out.

Bainbridge increased their score, at 2-0,  less than a minute later as Sophomore midfielder Aubrey Hill took a shot that hit an Americus-Sumter defender and the ricochet landed in front of the feet of Sophomore midfielder Evelyn Mach who responded with a 13-yard strike to the back of the nets.

The lady Cats took a three goal lead in the 14th minute as Emmons intercepted a goal kick by the Lady Panthers, dribbled in the penalty area and scored from 15 yards out.

In the 18th minute  Brinson passed the ball to Emmons who returned a pass behind the Lady Panther defense leading to a breakaway scoring shot from 16 yards out by Brinson.

Two minutes later Emmons again found the back of the net as she hastily dribbled in front of the Lady Panther defense looking for an opening, but the ball was deflected back to the top of the Penalty area, an alert Emmons changed directions and got off a 17 yard shot for the Bainbridge 5th goal.

Midfielders Britney Lopez and Emma Briggs scored the last two goals of the half to give Bainbridge a commanding 7-0 lead.

The Lady cats scored three more goals in the second half as Emmons and Brinson completed their hat tricks, with Bainbridge Junior forward Sarah Victor completing the scoring, in the 56th minute, on a breakaway to give Bainbridge a 10-0 victory.

On the night Emmons had three assists followed by Hill’s 2. Lopez and Senior Midfielder Mackenzie Pickle each picked up an assist in the winning effort.

The lady Cats entertained Harris County Friday night and will host Worth County on Tuesday at Centennial field.

GCA rolls through first round of state playoffs

It was a great week for the Cougars and Lady Cougars basketball teams, who both won in the first round... read more