GCA rolls through first round of state playoffs 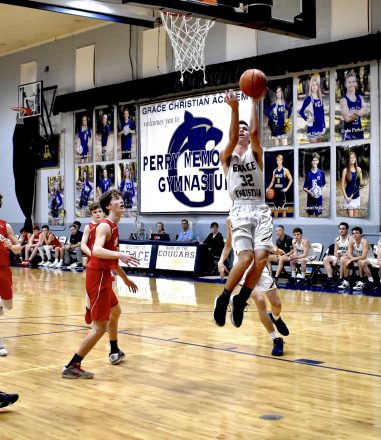 Wyatt Carpenter (32) goes for a layup in the first round of state playoffs against David Emanuel Academy.

It was a great week for the Cougars and Lady Cougars basketball teams, who both won in the first round of state and will advance to the quarterfinals over the weekend.

The Lady Cougars kicked things off with a win against Habersham 53-22. The team started the first quarter, scoring 15 points, while Habersham only was able to score 2 points, due to the Lady Cougars blockage.

Going into the second quarter, the Lady Cougars and Habersham went point for point, both scoring 13 points. Lainey scored nine points, making major plays for the team, while Emellia and Kate brought in the other four points.

Following half time, the Lady Cougars sealed the win, scoring 12 points in the third quarter and 13 points in the fourth quarter, while Habersham scored three points and four points respectively.

Wells finished off the night scoring seven additional points, as well as Lainey and Woodrum. Kate scored two more points throughout the game as did teammate, Katherine Griffin.

After the Lady Cougars’ great win on Monday night, the Cougars entered the gym with a sense of confidence and took home a win on Tuesday night against David Emanuel Academy 65-48.

Much like the Lady Cougars, the Cougars started with a fire, scoring 21 points in the first quarter.

Seth Parker could not be stopped; he scored 11 points in the first quarter, followed by Wyatt Carpenter scoring nine points and Carter Hathcoat scoring one.

David Emanuel came back in the second quarter, going point for point against the Cougars.

The Cougars scored 16 points, while David Emanuel followed closely with 15 points. Seth led in points again during the second quarter with five points, followed closely by Carpenter and Hathcoat. Kevin Brooks and Abram Austinson also brought four points to the board.

Coming out of halftime, the Cougars had nothing but net, scoring 28 points in the third and fourth quarter.

Both teams will now head to the quarterfinals, and guarantee themselves a spot in the semifinals if they win.