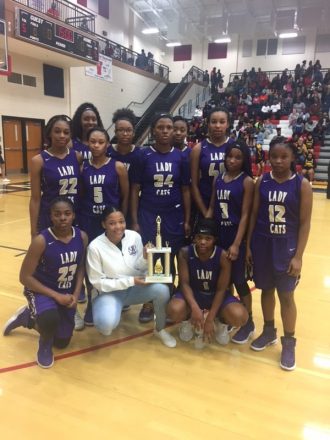 The Bainbridge Lady Cats didn’t hesitate when they were matched up against region leader and 1-seed Veterans (24-3) in the Region 1-AAAAA Tournament last Friday.

Instead, they opted to beat them.

The Lady Cats downed the Lady Warhawks 49-41 in the first round of the region tournament, ending Veterans perfect streak in region play. The win sent Bainbridge to the region championship on Saturday, where they came up short to Harris County 45-39.

It was good enough for a Region Runner-Up trophy, though. The victory also earned the girls a home game for the first round of the state playoffs.

Bainbridge will take on Jonesboro (12-13) this Friday at 7 p.m. at the Bainbridge Gym.

The following day against Harris County, Detavia Salter once again led the Lady Cats in scoring with a huge 17 points. Other scorers for the Lady Cats were Kirston Noble with 7 points, Denise Chappell with 5 points, Taralyn Brown with 3 points, Angel Peterson, Anndrea Porter and India Parris with 2 points each and Destiny Turner with 1 point.

The Bearcats (15-13) also took on Veterans (24-3) in the first round of the region tournament, dropping the game 81-59 against a tough Warhawks squad.

The Bearcats took it to the wire the following day against Harris County in a fight for third place in the tournament, but fell 77-76 to the Tigers. Lathan Levens had a massive night for the Bearcats, pouring in 27 points. KJ Cochran had 14 points and Mark Taylor Jr. followed with 11 points. Other scorers for the Bearcats were Dorrian Cooper with 9 points, Alvanni Williams with 6 points, Dewayne Kyles with 5 points and Dylun Worlds and Tyrell Bryant with 2 points each.

The Bearcats will travel to Riverdale for the first round of the state tournament on Friday. Tipoff is at 6 p.m.