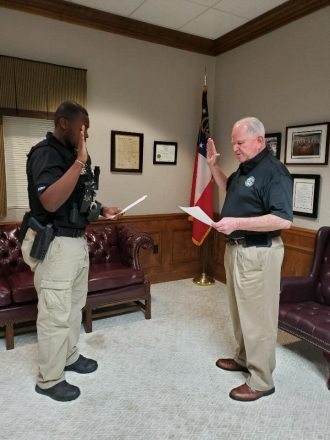 Sheriff Wiley Griffin reads the oath of office to Monteze McCall as he pledges to uphold his duties to his community.

Deputy Sheriff earns prestigious awards before being sworn in

Prior to becoming a deputy, McCall worked at the Decatur County Jail for three years; he then decided to take the big step and enter the academy. While at the academy, McCall received quite the honors.

He first received the prestigious Class Representative Award, which is the highest honor a cadet can receive from the academy.

All of McCall’s classmates voted on him to represent the 2020 class of cadets and give a speech that reflected on their time spent there.

“I was not expecting it all,” McCall said.

Still in shock from receiving his honor, McCall also was presented with the Lt. Michael Sangster Memorial Scholarship.

The scholarship is named after a deputy who became ill and eventually passed, but wanted to leave a legacy. The scholarship was then created in his honor. McCall said every cadet has the opportunity to write an essay and be entered for the scholarship. The essays are then reviewed by the directors and family of Sangster to see who best benefits from the scholarship.

“I was really caught off guard by the scholarship,” McCall said. “I never expected to win that.”

McCall said he will put the scholarship to good use, as he is still completing two online classes.

While completing those classes, McCall has entered into the line of duty and said he loves it. He admitted it took some adjusting after working at the jail, but he is thankful he took that big step and especially thankful the academy bestowed these honors upon him.

As a result of a proactive online undercover investigation coordinated by the Georgia Internet Crimes Against Children (ICAC) Task Force,... read more