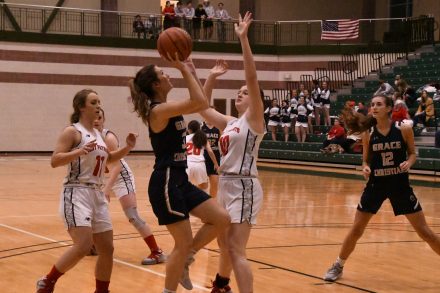 The Cougars faced tough competition, but came out on top 39-38 after a buzzer beating shot was made by Wyatt Carpenter.

Georgia Christian amped up their defense in the second quarter, allowing for the Cougars to score only eight points. Hathcoat scored three points, while Seth scored five. The third quarter proved to be even tougher with Carpenter being the only one to make a shot. He made two layups and a free throw.

However, it all came down to seconds in the final quarter. Georgia Christian went point for point with GCA.

Seth scored three points, while Hathcoat scored four. But, the final 20 seconds Carpenter scored when he was needed most. The Cougars were down by two points when Carpenter ran it back down the court and made a three point shot. Georgia Christian knew it was over but attempted one long shot to the net and missed.

As the buzzer went off, fans and family members ran onto the court and hugged Carpenter and other teammates for their refusal to give up.

With this momentum and giddiness in the stands, the Lady Cougars were bound to win too.

Coming out of half time, Citizens Christian put up a fight, and scored 17 points in the third quarter, while the Lady Cougars only scored six points, which were made by Warr and Kate.

The Lady Cougars refused to lose and scored 22 points in the final quarter, giving them a 53-44 win. Warr and Wells both scored seven points, while Lainey scored four and Woodrum and Kate scored two.

While the game was a team effort, Athletic Director, Rhonda Wells said Woodrum and Warr were the stars of the game.

“Mary Glenn has the most points, while Emellia had crucial steals and timely baskets.”

Both teams will go on to fight for state and have not given up hope that they can bring home a title.